Today’s that special commercialized day where you show love to someone special by spending money on them because money equals love, right? Well, regardless of how you celebrate, if you celebrate it at all, there are gun ways to show people you are thinking of them. Friends, lovers, family, and secret family; these Valentine’s cards will bring a smile to any gamer you know. In keeping with tradition, Borderlands developer Gearbox has released cards inspired by your favourite characters. Since Borderlands 3 is a new release, we get some new ones. Square Enix has also released a bunch of cards featuring characters from Final Fantasy VII Remake. 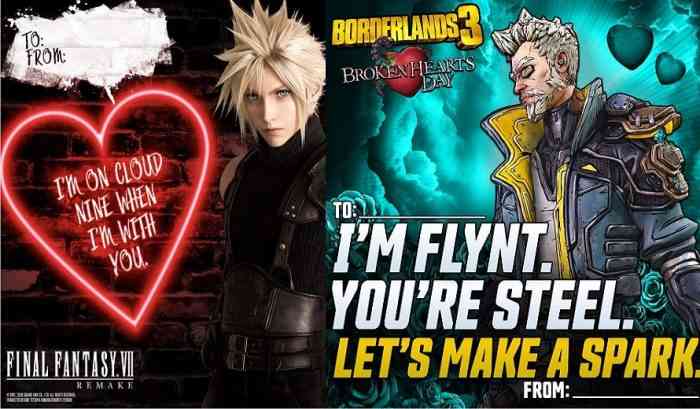 There are eight Valentine’s cards coming from Gearbox. They feature Moxxi, Tina, Claptrap, Tyreen, Vaughn, Rhys, Vladof, and the Vault Hunters; Amara, FL4K, Moze, and Zane. Each of them using puns and innuendos inspired by they way they speak or their personality. The Borderlands series has always been known for their wacky characters and frequent use of innuendo, but unfortunately for Moze fans, like your ol’ pal Zane, her Valentine card specifically marks you as her “BFF”. Maybe send that to someone you just want to stay friends with.

The cards from Final Fantasy VII Remake are no less clever. We have cards with Cloud, Tifa, Aerith, Barret, Sephiroth, and the summons; Choco-Mog, Ifrit, and Shiva. Fortunately, there is no card with Professor Hojo talking about impregnating you and experimenting on the child in utero. If you want to familiarize yourself with these game, Borderlands 3 is out now on PC, PS4, Xbox One, and Stadia, and Final Fantasy VII Remake will be out on April 10th on PS4. Borderlands 3 currently has its Broken Hearts Day event active.

Which is your favourite card? Let us know in the comments below.