Pay a Visit to Madam Nazar

It seems that every game has plans for Valentine’s Day. Red Dead is no different. Sometimes, it just does not cut it to just have a Valentine’s Day event. That is why Rockstar Games is applying boosts to Red Dead Online as well as having the Red Dead Redemption 2 Lover’s Collection. During this event, rewards will be coming to players in the form of sales, boosts, and special items. Though Rockstar does not give specific dates for these boosts, the news came out on February 11th, so we can assume they will be in effect until February 18th. 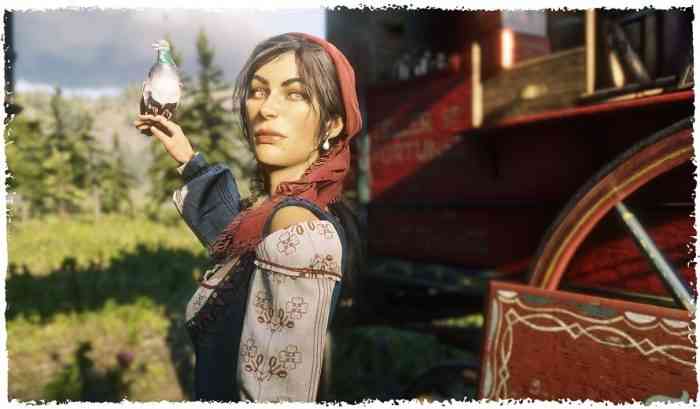 The Lover’s Collection is the Valentine’s Day celebration. During this week, players can meet Madam Nazar and “send her the Chocolate Daisy, Yellow Gold Diamond Ring and the Two of Cups Tarot Card to complete the Lovers Collection and receive a handsome reward in return.” The small blurb does not go into detail about what rewards it refers to, but you can be sure it is worth finding out. The Charleston top hat, Reaves top hat, and men’s Caughtery shirt are being added to Wheeler, Rawson & Co. catalogue. There are also some limited time items available during this time including the Morning Tail, Irwin, and Eberhart coats, and Furred and Woodland gloves.

Boosts for the specialists Moonshiner, Bounty Hunter, Trader, and Collector missions are also applied. Doing these missions will give players +40% to XP and Role XP. Moonshiners also receive a 25% discount on properties and relocation fees, and a 5 Gold Bar discount is being applied to the Bounty Hunter License, Butcher’s Table, and Collector’s Bag for those who have not yet chosen their Western occupations. Red Dead Redemption 2 is out on Stadia, PC, PS4, and Xbox One.

Will you be treating Madam Nazar? Let us know in the comments below.