Every season of Fortnite has its own theme. There’s been pirates, future, Winter, and others. This new season sees a spy/secret agent theme. A new release trailer and other promotions show some snazzy new threads accompanying the Battle Pass, as well as a not so secret Deadpool costume. Something new to Fortnite Chapter 2 Season 2 is that there will be teams for players to side with. They can choose either Shadow team or Ghost team, and that will affect the visual style of the characters during this season. A release trailer for this season was put out yesterday. 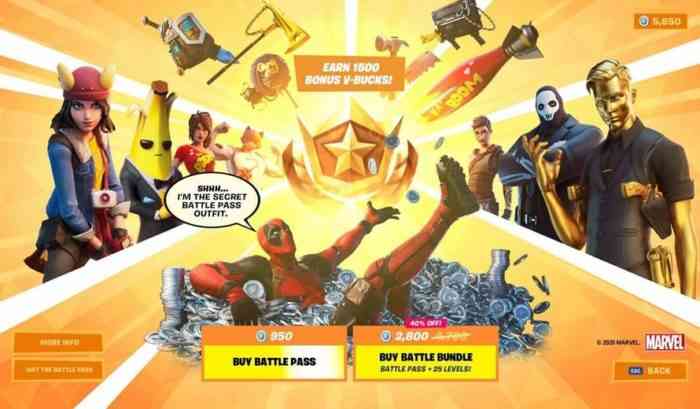 The release trailer for this season gives off heavy vibes of The Incredibles. There is swing music playing while different characters answer a call from their secret earpieces. We see a lot of classic/generic secret agent behaviours like stepping off a speedboat and mysteriously disappearing into the water, or walking throw a secret revolving bookcase and coming out with a suit on. If you look carefully, you can see Deadpool hiding behind the bookcase. At the end of the trailer, we see all the characters assembling in a meeting room, about to plan something big.

The Battle Pass information shows some interesting stuff. For starters, Battle Pass owners can maximize their earnings for a grand total of 1,500 V-Bucks. Since the Battle Pass costs 950 V-Bucks, that is more than enough to pay for the next season. We also see Deadpool lounging in a pile of V-Bucks with a speech bubble saying “Shhh… I’m the secret Battle Pass outfit”, so there’s also that. Why is the Merc with the Mouth in this season? Who cares? The nature of Deadpool kind of transcends reason. Fortnite Chapter 2 Season 2 is active right now.

Will you be joining Shadow team or Ghost team? Let us know in the comments below.