The Walking Dead: Saints and Sinners Trailer and Pre-Order

Who Are You, Tourist?

By now, we all know that The Walking Dead is more about the conflict between people and the conflict within themselves than with the walkers. It also doesn’t hurt for it to take place on the backdrop of a post-apocalyptic world with interesting action sequences. A couple of months ago, we got an introduction to the new Skybound Games spin on The Walking Dead series Saints and Sinners. A couple of days ago, they some gameplay in The Walking Dead: Saints and Sinners trailer as well as the different pre-order options and bonuses. 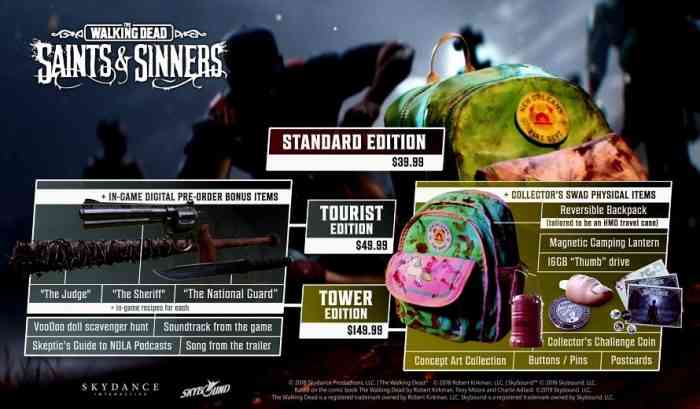 The trailer starts with a voice talking to the player. They keep calling the player “Tourist”, which suggests that is what our nameless protagonist will be referred to, like Skyrim’s Dragonborn or Fallout 4’s Sole Survivor. The voice almost sounds like they are interrogating; asking what who they really are, what kind of person they are, and how they live in this desolate world. All the while, the trailer shows off the kind of gameplay elements and options that are available. At the end of the trailer, we are shown the pre-order options; the Tourist Edition and the Tower Edition.

The Tourist Edition comes with a few in-game items; “The Judge” which is a barb-baseball bat like Negan’s Lucille, “The Sheriff” like the revolver Rick Grimes uses, and “The National Guard” which is a combat knife. There is also a digital soundtrack and something called “VooDoo Doll Scavenger Hunt”. The Tower Edition comes with all the content the Tourist Edition has plus physical memorabilia. This includes a backpack like the one seen in the original cinematic trailer, a magnetic camping lantern, a USB “Thumb” Drive which looks like a thumb, a collector’s coin, and some buttons, pins, and postcards.

The Walking Dead: Saints and Sinners will be out on the Oculus Store and Steam on January 23rd, 2020, compatible with HTC Vive, Valve Index, Oculus Rift, and Window Mixed Reality. It will become compatible with Oculus Quest in Q3 2020 and release on PSVR in Q1 2020.

Are you going to get Saints and Sinners? Let us know in the comments below.