Unlock a Doom Eternal Skin for the Doom 25th Anniversary

We are a few months away from Bethesda’s sequel to their 2016 reboot of the Doom franchise. Fans are now being given the opportunity to unlock a 25th Anniversary Doom Eternal skin for the upcoming game, which is odd because Doom celebrated its 26th anniversary this month, but whatever I guess. The skin is entirely grey, which is also odd because Doomguy’s armour is classically green, but then again he also had an ab-window. For fans wanting to unlock this skin, it is a little more complicated than just clicking a button; you will have to work for it. 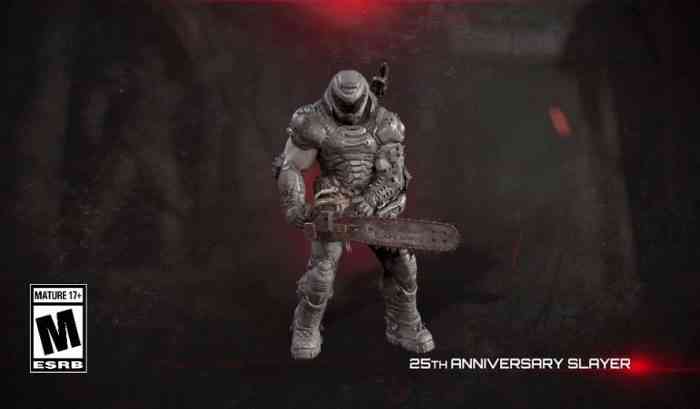 While it would have been cool to have players complete a challenge or objective in the 2016 Doom, it also would have been a little predictable. Instead, Bethesda has taken the route of getting fans engaged in the online community. To unlock the 25th Anniversary skin, you must join the Slayers Club and achieve the rank of DOOM Slayer. To climb the ranks, you must do certain actions to earn points such as daily login, entering polls, reading news articles, submitting fan content, and other things. If you are a VIP member for Borderlands 3, it is a very similar program.

The 25th Anniversary skin is not the only reward for members of the Slayers Club. As you climb the Slayer ranks, you can unlock up to six skins, including the grey 25th Anniversary skin. You can learn more about how to unlock these skins and earn points from Bethesda. Doom Eternal will be available on March 20th, 2020 on PC, Xbox One, and PS4. It will also be available on the Nintendo Switch, but the release date has not yet been determined.

Will you try to unlock these skins? Let us know in the comments below.