The First Tropico 6 DLC is Rolling in the Dough

The Llama of Wall Street Brings Big Money to Tropico 6

Tropico 6 just received its first paid DLC, The Llama of Wall Street, which focuses on the riches of capitalism. Gamers will be able to build the Trade Institute, manipulate the price of goods and other new improvements as well as attempt to take down Wall Street itself in a new standalone mission. The Toy Workshop and Smart Furniture Studio will be used to further significant economic power. Tropico 6 is available on PC, Xbox One and PS4 while The Llama of Wall Street can be purchased right now for $9.99. 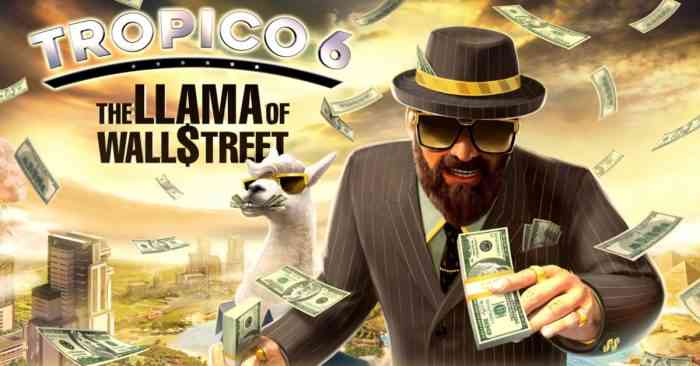 The following content will be included in The Llama of Wall Street:

Apparently a new update to Tropico 6 will add free content for gamers not willing to spring for the paid DLC. Gamers will have access to a new Warehouse building. They’ll be able to store goods and cash out later for a quick buck. The new map “Rio” will be playable for everyone along with the community-requested “Social Security” edict, allowing students and retirees to receive money from the government and avoid going broke.

Are you a Tropico 6 fan who’s excited for The Llama of Wall Street or will you just be checking out the free content? Let us know in the comments below!