2K Games is always trying new things for each of their franchises. When you have annual releases of all of your sport titles, you need to keep things interesting; spice things up in the living room. Their answer in this year’s wrestling game is WWE 2K20 Originals. Originals Mode appears to be themed events that are separate from regular WWE matches. Each event has a different arena and style. The downside is, they are not free and will have to be purchased separately, so no bundle or deal unless you have the Deluxe or Collector’s Editions. 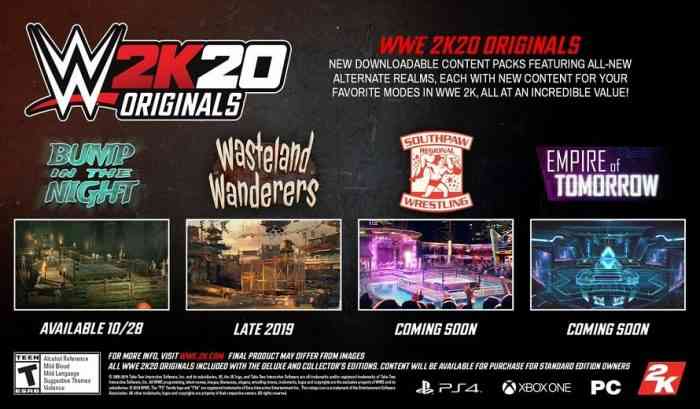 The first in of the Originals will be the Bump in the Night DLC, which is included for free with the pre-order of any edition. This is a Halloween themed event with a spooky, haunted arena. It will be playable on October 28th. The next is post-apocalyptic Wasteland Wanderers, which looks a lot like Mad Max or Borderlands. Wasteland Wanderers is available in “late 2019”. Later, at undetermined dates will Southpaw Regional Wrestling and Empire of Tomorrow. Southpaw Regional Wrestling a fictional 1890s wrestling league created by WWE, which one could argue is also fictional. Empire of Tomorrow appears to be futuristic wrestling event with a Tron-like arena.

Once again, if you bought the standard edition of WWE 2K20, you will have to purchase these pieces of DLC separately. If you have any special edition, you don’t have to worry about extra costs. WWE 2K20 comes out on October 22nd on PC, PS4, and Xbox One.

Which event looks most interesting to you? Let us know in the comments below.