Get the Edition Fit for a Superstar

In just under one month, WWE 2K20 will be coming out. If you have your eye on this game, now might be the time to pull the trigger on the purchase. We know all the WWE 2K20 pre-order bonuses and help you decide which edition you want. First of all, there are three different editions; the Standard, Deluxe, the Smackdown 20th Anniversary Edition. Let’s break down what has what and how you can get it. You’ve got about a month to weigh your options. 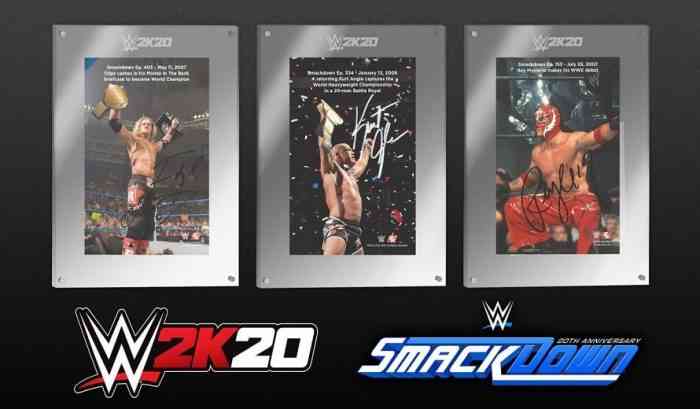 Let’s start off the the Standard Edition. Obviously you just get the game, but if you pre-order this or any edition, you get the WWE 2K20 Originals: Bump in the Night Content with “The Fiend” Bray Wyatt and a ton of other things like arenas, characters, and cosmetic pieces. The Deluxe Edition comes with something called the Accelerator Pack (which might be an in-game currency bonus), the WWE 2K20 Smackdown 20th Anniversary Digital Content which includes the wrestlers Hulk Hogan, Chyna, The Rock ($500 Shirt), and the Rock N’ Sock Connection (The Rock & Mankind/Mick Foley tag team). It is unclear if The Rock and Mankind are playable separately or just as a tag team. The Deluxe Edition also comes with something called MyPLAYER Kick Start.

The Smackdown 20th Anniversary Edition contains all the above content as well as physical bonuses. These include Super Cards featuring Becky Lynch & Roman Reigns and The Rock & Mankind, an acrylic piece featuring the WWE Smackdown Ring Skirt from 2002 – 2008, and 1 of 3 possible acrylic pieces of Smackdown Legend Autographs from Edge, Rey Mysterio, or Kurt Angle. Buying a physical copy of any edition also gets you a Limited Edition card of Becky Lynch and Roman Reigns. You will actually have to wait until October 2nd to pre-order the Smackdown 20th Anniversary Edition, but the Standard and Deluxe Editions can be pre-ordered right now. WWE 2K20 comes out on October 22nd on PS4, Xbox One, and PC.

Which bonus is most appealing to you? Let us know in the comments below.