No More “Bro, What Prestige Are You?”

While this year’s Call of Duty will still probably be more familiar than different, Activision is trying a lot of new things. For instance, Call of Duty is done with season passes and has moved on to battle passes. Another difference is the way Modern Warfare player progression will work. Like season passes, another classic Call of Duty feature will be replaced. When it comes to online multiplayer in CoD, the Prestige Ranks often come to mind, but that is now a thing of the past. 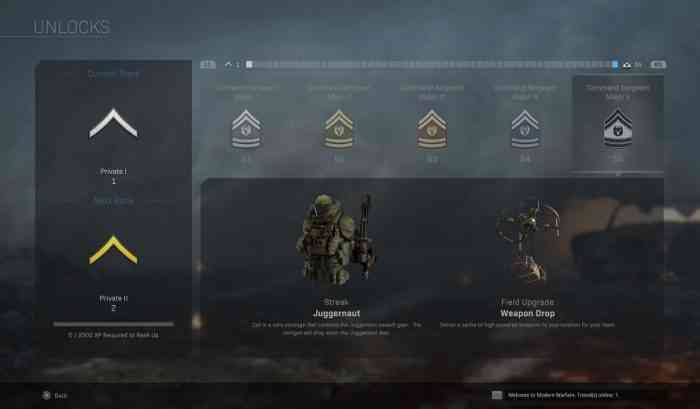 In a blog by Activision, the new progression system is explained. Instead of one overall level for a player, their progress will be divided into three areas: Player Level, Enlisted Rank, and Officer Rank. The way it is explained is a little confusing, but will probably make more sense when we get our hands on it. Enlisted Rank is a pretty traditional system that CoD players will be familiar with. By gaining XP, players move up through the Enlisted Rank, unlocking weapons and attachments. Enlisted Rank never resets like Prestige Ranks would, so players keep all their unlocks. After maxing out the Enlisted Rank, Officer Ranks unlock.

Officer Ranks specific to each season, resetting at the end of the season. These ranks unlock just like Enlisted Ranks by gaining XP, but will reset once it maxes out. Every time it resets, the player gets a ribbon for that season. If the player gets 100 ribbons, they become one animated ribbon, indicating the maximum achievement for the season. The Player Level appears to be an overall display of accomplishments. It shows the progress through Officer Ranks through the seasons, so even though they may reset, they are recorded permanently. Call of Duty: Modern Warfare will be out this week on October 25th for PC, PS4, and Xbox One.

Do you like these new changes coming to CoD? Let us know in the comments below.

The Latest Call of Duty Update is Only a Day Old and People Are Already Complaining
Next
Blizzard Leaker Sure Diablo 4 Getting Announced Soon
Previous
The Top 20 Game Deals in Amazon’s Weekend PS4, Switch & Xbox One Blowout