Talk Your Friends Through Bloodmagic Rituals in Exorcise the Demons

Keep Talking and Nobody Gets Sacrificed

Ever heard of Keep Talking and Nobody Explodes? It is a VR game that came out a few years ago where the player has to disarm a bomb in a digital space. A second player has instructions on how to disarm it, but they cannot see the bomb or any of its components. The two players must communicate to successfully disarm the bomb before it goes off. Now that that is out of the way, imagine that but with arcane magic. You come out with Exorcise the Demons. 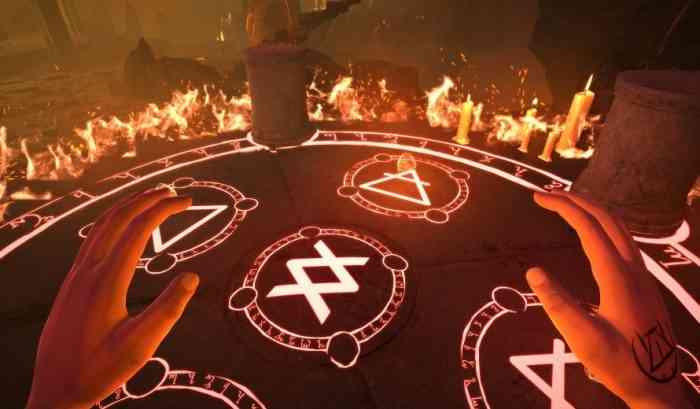 A couple of days ago, developer Midnight Games released a trailer for Exorcise the Demons. The trailer lays out the premise of the game similarly to Keep Talking and Nobody Explodes, the only difference is that Exorcise the Demons is not in VR… yet. Different rituals appear to be different minigames. Some use ciphers, one appears to use a Ouija board, but not too much detail is shown about what exactly the players will need to do.

In the comments section of the video, viewers ask questions that you are likely wondering. The game is not in VR currently, but the developers say that if the game is successful enough, they will be implementing VR support, which it already looks like it is made for. As far as translation goes, it will be playable in English, French, German, Spanish, Italian, Russian, and Chinese. It will also have a story mode, and possibly a quickplay option. Exorcise the Demons will be available on Steam on September 18th.

Will you and your friends be defending this realm? Let us know in the comments below.

Persona 5: The Animation Will Be Getting an English Dub
Next
Little Nightmares 2 Trailer Reveals a 2020 Release Date
Previous
Star Wars: The Rise of Skywalker Poster Reveal and New Teaser Footage