Gaming on a PC can sometimes be stressful. Every time a beautiful new game comes out a lot of PC owners all worry about whether or not their PC can even run the game. Or at least run the game so it doesn’t look like its being played on an N64. The specs of everyone’s PC are constantly being outdated or surpassed by the latest and greatest technology in terms of graphics and other hardware. 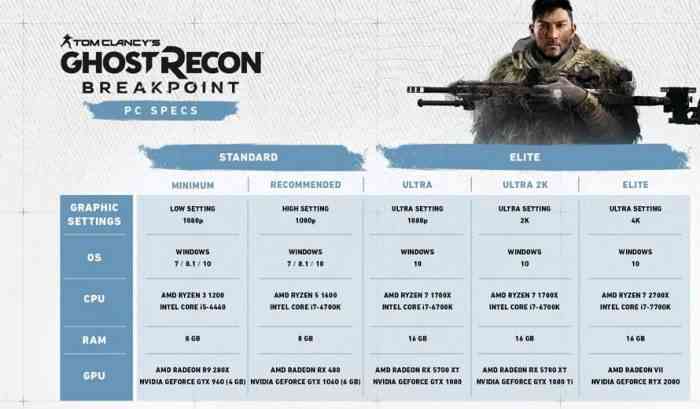 It can be hard to keep up. Or at least know what you’ll need in order to run a game you have been waiting on for months. Well, the nice people over at Ubisoft have gone out of their way in order to tell you the specs you’ll need to run Ghost Recon Breakpoint.

It looks as though if you want to run this game on the lower specs, most computers that have been purchased within the last couple of years should be able to do it without issue. However, if you’re looking to run it on Ultra or Elite you’ll need a pretty beefy computer. Please prepare accordingly.