Ubisoft Has Revealed How All NPCs Are Playable in Watch Dogs: Legion

Ubisoft came out the gate swinging at E3 2019 showcasing their brand new and upcoming Watch Dogs: Legion. Much to our surprise the game came with a huge announcement: you can play as anyone you want. With such a huge promise to fans, how exactly is Ubisoft able to pull this all off? In a recent interview one of the men behind the game, Clint Hocking, reveals how they’ve been successful with such gameplay. 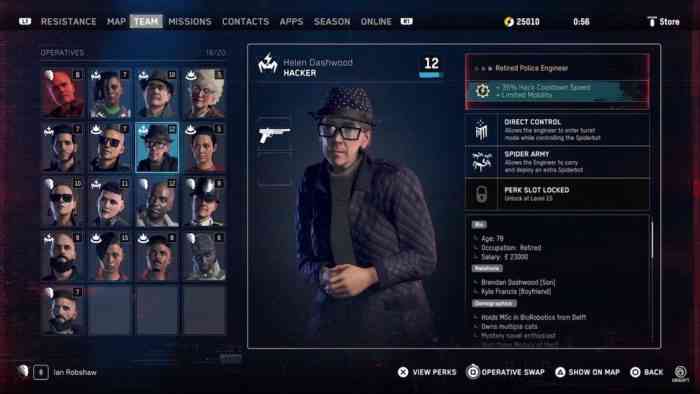 According to Clint Hocking, the Creative Director of Watch Dogs: Legion, they system behind it all is called census. The game spawns NPCs and after they’ve been selected by the player, this system will basically download a profile and backstory to that same NPC. Here’s how Hocking explained it, “The most important thing about census is that it allows us to spawn NPCs in the world just like you do in many other games, but then when you profile those NPCs the relational database is able to fill in the blanks on who they are and sort of generate them in real time and then make them persistent and keep them in the world.”

He continues, using a groundskeeper as an example of how the census system would work, “So if you see a groundskeeper trimming hedges in a park, and he has a certain ethnicity, when you lock on to that person and profile them, he’s going to have a name that reflects the ethnicity that you saw and he’s going to have an animation set based on how he was animating, he’s gonna have a job that says groundskeeper and it’s going to be at a certain time. And then because he’s a groundskeeper, he’s going to make a certain amount of money which means he’s gonna be allowed to live in certain neighborhoods, and because of his ethnicity will navigate to a different part of those neighborhoods depending on where the different communities live within London. Then he’s going to have certain friends and activities maybe he’s an outdoorsy guy. He has an outdoor job so he may be more fit and have a gameplay trait that reflects higher health or higher agility or something like that.”

Hocking breaks it down further, saying that in doing this, it creates an atmosphere that feels more realistic. “All of these things are internally in sync and coherent so that every NPC feels real and credible. Then when you recruit them, they get their own narrative persona, their own voice, their own animations, their own fighting style if they do melee…all of those things are again, coherent with that guy that you first saw trimming a hedge in the park when you were walking by and caught your eye for whatever reason.”

It’s hard to deny that the entire premise is very intriguing. Watch Dogs: Legion is set to drop for the PS4, Xbox One, PC, and Stadia on May 6th, 2020. What do you think about this intricate system that Ubisoft has designed for their latest game? Let us know your thoughts in the comments below and don’t forget to keep it locked for updates!