Roller Champions is Multiplayer-only and Similar to Rocket League

It appears that another one of Ubisoft’s E3 announcements has leaked early. Roller Champions is a new IP from Ubisoft and is a multiplayer Roller derby-style game similar to Rocket League. Details are expected to be revealed next month at E3. 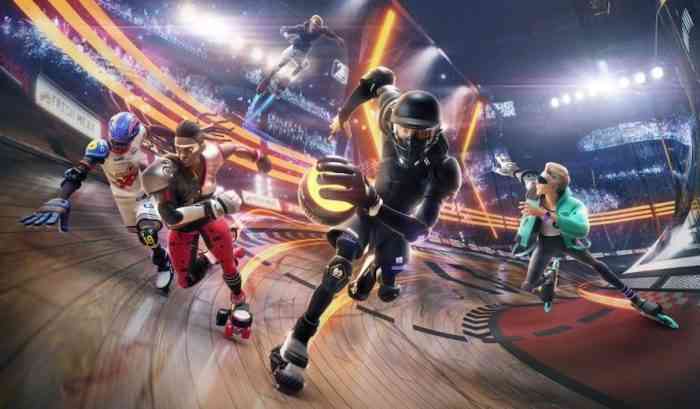 As reported by Spiel Times, Roller Champions is multiplayer-only, allowing two teams of five players to roller skate counter-clockwise around various tracks. If you’ve ever watched it TV, Roller derby is a fairly traditional contact sport but things can certainly get hairy when players try to pass one another on such small tracks.

The game is supposedly being released on PC, but it might come to other platforms as well. It is being built using the Unity engine and will have Xbox One controller support. Spiel Times has a screenshot of the main menu screen, controller button layout, and even some footage of some of the tracks.

According to a Resetera user, players will have access to quick play, ranked, custom, and tournament matches straight from the menu. There will be sound options to change specific aspects of the crowd, music, voices, and sound effects. There will even be a streamer mode for, well, streaming. There will also be two aiming modes (Price and Flick) that can alter the X and Y sensitivity.

No other details, including developer and release date, have been revealed.

Usually, we’d treat rumours and leaks with a tub of salt until we get confirmation, but Roller Champions does look to be the real deal. While the footage released doesn’t show any actual gameplay — just a few overhead shots of some of the stages — there doesn’t seem to be any evidence to suggest it isn’t real either. With E3 just around the corner, we’ll be finding out soon enough.

What are your thoughts? Leave us a comment below.