Rage 2 Roadmap Shows DLC Coming in the Next Few Months

Careful planning. That’s what came to mind when laying eyes on this roadmap. I’ve never seen launch day on a game’s own roadmap, as it is a little bit odd to see one for a game before it is even released. There is quite a bit coming in the next few months. This may bring some joy to fans that out of the twenty or so DLC pieces, there are only two paid expansions planned between now and the Winter. The Rage 2 roadmap lays out skins, events, vehicles, and challenges. “It’s like a GPS for AWESOMENESS.” 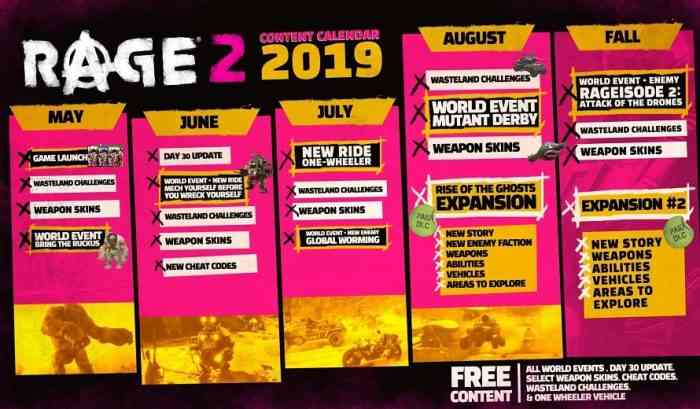 Get a peek at what’s comin’ in the 2019 #RAGE2 roadmap! It’s like a GPS for AWESOMENESS. pic.twitter.com/1wW1D7Vdxi

Up until August, all the DLC has been free. August’s challenges, weapon skins, and event Mutant Derby is also free, but the first paid DLC is called Rise of the Ghosts. This includes content for a new story, enemy faction, weapons, abilities, vehicles, and areas. Sometime between September and December, Rage 2 will be getting more weapon skins and challenges, another event called Rageisode 2: Attack of the Drones, and another piece of paid DLC. This will include the same bonuses as the first DLC expansion. All this was tweeted out by the official Rage 2 Twitter account.

Rage 2 comes out on May 14th on PC, Xbox One, and PS4. Are you picking it up? Let us know in the comments below.