Gaming Subreddit Not Fooling Around

One of Reddit’s most popular gaming subs has closed down for April Fool’s Day to address a serious problem in the gaming community. 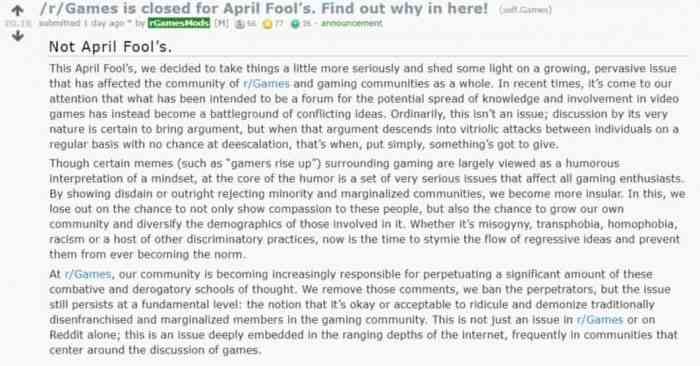 The above picture is just a small portion of the lengthy post calling out various forms of toxicity that have been prevalent in the gaming community for – well, forever, really. The rest of the post goes on to point out specific instances and examples of various forms of hate speech that have taken place on the subreddit in an imgur album, before talking about how the community at large can improve, as well as a variety of charities dedicated to helping disenfranchised communities which you can check out right here:

Paws with a Cause

Out of the Closet Thrift Store

In an “Aftermath Discussion Meta Thread,” the mods explain some of the thought behind their course of action and most importantly note that “asking people to be nicer to each other and engage with respect and dignity is not politics, it’s human decency.” They also note that they “did anticipate some negative feedback but we received far less than we expected, in comparison to the positivity and support we saw online.”

Unfortunately, the vitriolic behavior in question is all too familiar to members of the gaming community. From the unfortunately common shared experience of coming across hate speech in online games, to Gamergate, to tragically fatal instances like SWATting, there’s quite a bit of work to be done. Though some members of the subreddit in question seem to find it one of the more civil platforms for discourse within the community (I see r/pcgaming getting called out quite a bit in the thread), the spotlight being put on the overall issue during the past 24 hours ultimately justifies the means to an end.

Gear Up As Lord of The Rings Mobile Game Launches Soon
Next
New Sakura Wars Announced for PS4, Western Release Confirmed for Next Year
Previous
No More Heroes News Could Be Coming to E3