A couple weeks ago I got to visit the folks at Toronto’s Dark Slope studios and check out what could be the future of social destination gaming experiences. 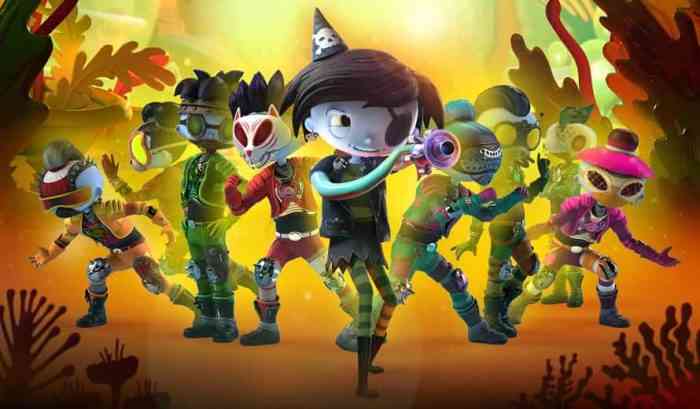 The team at Dark Slope is currently hard at work on – put lightly – a VR experience based set in the world of Scarygirl, a cult comic series by Australian author Nathan Jurevicius. But it’s far more than your standard VR game. Dark Slope is utilizing one of the world’s first ever six-point tracking systems to create a 1:1 free-roam virtual reality adventure, in which you and your friends can see each other walking around and interacting with the game world with 100% real-time accuracy. There’s no dangfangled cords to reel you back if you get too far from a computer, and the VR gun you use is closer to the BFG from the 2005 Doom movie than the PlayStation Aim controller.

Nathaniel Smith, one of the team’s associate producers, was kind enough to help get myself and Dark Slope president CJ Hervey get strapped in for my trip to the world of Scarygirl. Of the six points used for tracking, two are on your hands, two are on your feet, one is in a special backpack you wear, and the final one is in the VR headset itself. On top of this, the studio space’s walls and ceiling are lined with 30 different motion tracking cameras to create the 1:1 scale accuracy that allows players to wander around the room untethered, with Matrix-like graphs appearing in-game when you get too close to a boundary. Going in, I was worried that I would come down with the dreaded VR sickness that is unfortunately an inherent part of far too many virtual reality experiences on the market today. But thanks to this level of accuracy, every footstep and turn of the head felt not only comfortable, but entirely natural. I remember thinking to myself, “Wow, this is the sci-fi promised future of gaming we’ve been looking forward to.” 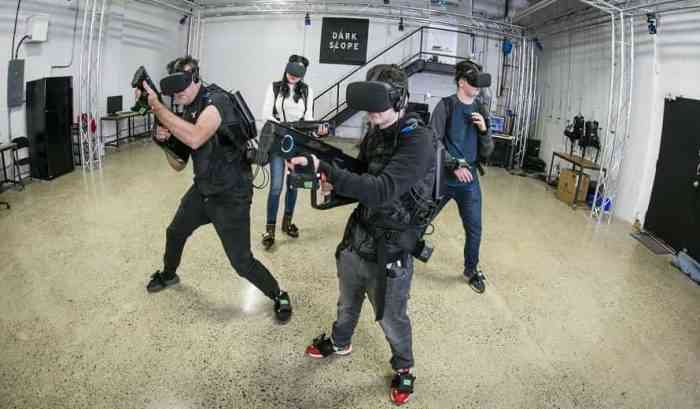 CJ prefaced the experience with an intro video that made it feel like a full-blown Disney World attraction. After suiting up and jumping in, we were escorted through this brave and bizarre new world by Scarygirl herself, playing as one of Dr. Maybee’s many “Rejects,” sucking up toxic goo with our massive guns and fighting off the somewhat hostile wildlife. It was never particularly challenging, which is understandable considering it’s intended to be an accessible social experience. The environments themselves reminded me of a cross between Tim Burton’s colorful Alice in Wonderland films and Gears of War’s creepy imulsion mines. But overall, the tone was lighthearted and fun – it is based on a children’s comic after all. There were multiple moments where CJ had to remind me that combat was taking place, as I kept getting caught up in the authenticity of feeling my body physically moving through a virtual space in real-time, often literally stopping to smell the flowers and enjoy the surrealist art design. Over the course of our playthrough, we walked the length of the studio space 6 whole times.

After playing Scarygirl: Mission Maybee, I’m absolutely thrilled at the prospect of what kind of experiences this kind of technology could bring in the future. In a brief discussion with CJ following our playthrough, he explained that the game will be available to play at various equipped locations across Canada rolling out over the course of this year. This is part of a growing “location-based entertainment” market, in which people recruit a few friends to go to a destination and try out one-of-a-kind experiences like this. Eventually, these kinds of experiences will allow for what are essentially “VR Theaters,” where there will be a wide array of them available in one location. Things like this really take “look at how far gaming has come!” moments to another level – it makes the consoles and games we grew up on look like literal lightyears behind us, even moreso than they already are.

If you’re in the Toronto area and are eager to try out the future today, you can book a visit to Dark Slope studios to try out Scarygirl: Mission Maybee over on the official website.