It Comes in a Big Beautiful Box, but does it Justify the Price?

Jump Force comes out today. It is like the Avengers: Infinity War of anime, a very large, ambitious crossover. The game has all the big anime names like Dragonball Z, Naruto, Bleach, One Piece, Yu Gi Oh!, and many others. With any release of this scale, a collector’s edition accompanies. The Jump Force collector’s edition comes in at a price of $330 CAD/$260 USD, so let us look at what comes with it. IGN did an unboxing video showing off all the neat things that come in the box. 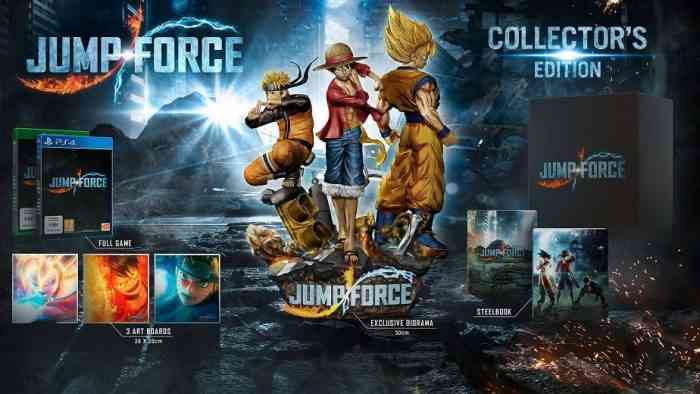 The center piece of the collector’s edition is the statue. It features Luffy standing over the Jump Force logo, Goku in his Super Saiyan form, and Naruto in his Naruto Shippuden outfit. It is packaged as four separate parts; Luffy, Goku, Naruto, and the stand. The stand itself is a piece of scenery from one the city the trailer takes place in. There is a broken traffic light Naruto is perched on and a miniature taxi blowing up mid-frame. It looks to stand at about 10 – 12 inches tall and about 5.5 – 6 inches in diameter.

The box also contains character art of the three on the statue. The art depicts Luffy in his Gear Fourth form, Goku as a Super Saiyan God, and Naruto in his Nine-Tails Chakra Mode. The dimensions of the art boards look to be about 12 by 12 inches. A steel book for the game is included that features Luffy, Naruto, and Goku. The image on the steel book is one that has been used in advertisements all over the internet. Of course, the standard game comes with it. It does not seem like a lot considering the price tag. There have been fuller collector’s editions with similar prices. Is it worth it? That is up to you.

Will you be picking up the Jump Force collector’s edition? Is it worth it? Let us know in the comments below.