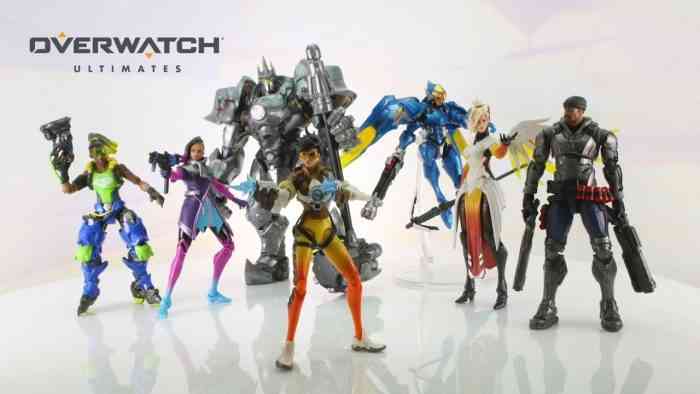 Blizzard and Hasbro are set to deliver a lineup of action figures called Overwatch Ultimates and they’re already available for pre-order! So which characters are available to pick up? So far, it’s been announced that nine heroes will have their very own collectible figurine: Ana, Pharah, Mercy, Soldier 76, Reaper, Lucio, Reinhardt, Tracer, and Sombra. The figures feature weapons, stands for display and even opposable joints.

So how much will one figure set you back? Maybe not as much as you would think. Most of the action figures will set you back $20 USD, meaning that they’re pretty affordable in comparison to some top of the line statues that would cost upwards of $100 each. Some heroes will cost closer to $50 USD, like Reinhardt, as well as the bundles of two figures like Ana/Soldier 76 and Pharah/Mercy. It’s also noted that the figures will be scale size, so they could very well vary in height, the obvious outlier being Reinhardt.

Some of the action figures, like Reaper and Ana, will not be featured as their original skin, but rather their Reyes and Shrike skins respectively. As it stands right now it’s unclear whether there will be more options for different skins in the future or if each character will only be available with the one chosen by Blizzard/Hasbro. You can check out the big reveal trailer for the figures below.

The Overwatch Ultimates will be released through GameStop at the end of April, but are currently available for pre-order right now. Are you interested in picking any of these collectible figures up? Let us know your thoughts on them in the comments below and don’t forget to keep it locked for updates!