We Must Protect this House!

If you’re a Roomba, you have one job: keep the house clean. You will do that job by any means necessary. One night, some strange men enter the home after the family leaves. Just think of the mess they will make. You cannot let that happen. You must keep the house clean. Roombo: First Blood is a stealth action-game where you must eliminate burglars and clean up the mess before your family comes home. Equipped with smart technology that connects you to every appliance and device in the home, these burglars do not stand a chance. 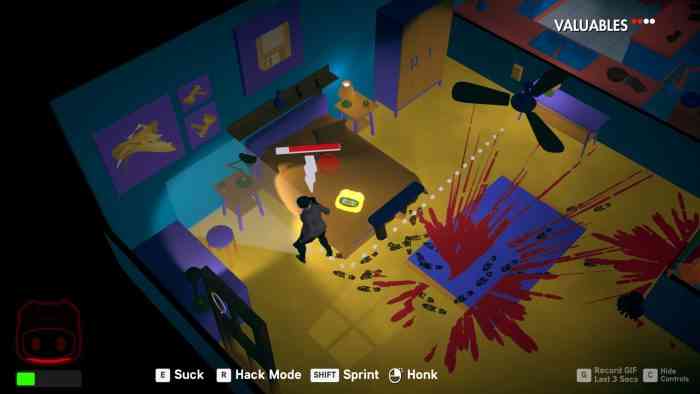 Roombo: First Blood comes from developer Samurai Punk, who gave us 2014’s ScreenCheat and 2018’s The American Dream. Let’s break down the screenshot above. The controls at the bottom are labeled Suck, Hack Mode, Sprint, and Honk. Suck the primary cleaning function, cleaning up blood, footprints, and other messes. Hack Mode is how the player can access the appliances and devices to use as traps to kill the intruders. Sprint is what most sprint functions are, which is a speed boost. Honk is likely to be a distraction feature used to lure the burglars toward your traps.

On the left side of the screen, there appears to be a charge meter. As we all know, Roombas have a charging station they connect to. In other screenshots on Steam, there is an image that says “Fully Charged” which may boost the player’s abilities. The green meter is actually sectioned off into three bars, likely to limit how many times you can interact with other devices. It also may be up-gradable, but that remains to be speculation. Roombo: First Blood is slated for release on Steam in the second quarter of 2019.

What do you think of Roombo? Let us know in the comments below.