Players will have to Work for More Story

A couple of weeks ago, details were released about the Kingdom Hearts III epilogue. The announcement went over the game’s post-launch patch schedule of endings. The “secret” ending can only be viewed after completing the game with “fulfilled certain criteria”. At the time, that criteria was unspecified, but now that the game is less than a week from launch, and pre-release copies have been sent out, the time has come for these details to be defined. In order to view the Kingdom Hearts III secret movie, players will have to take in-game photos of what are being called “Lucky Marks”. These lucky marks are patterns in the environmental objects depicting the Mickey Mouse symbol. 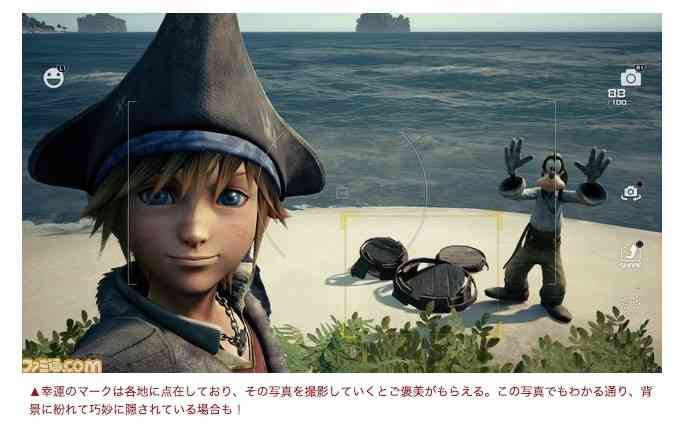 The image above from Famitsu, is an example of a Lucky Mark. In this particular image, the symbol is made up of pieces of a black barrel in the Pirates of the Caribbean world. In an interview with Famitsu, Tetsuya Nomura explained exactly how these marks contribute to unlocking the secret movie. The number of Lucky Marks found and photographed required depend on the difficulty players complete the game on. If playing on Beginner mode, players will have to find all the Lucky Marks. Standard difficulty “isn’t that strict” in terms of who many needed to be collected. Proud mode, which is the hardest difficulty only requires a few marks. The exact numbers are not specified, but there may be an in-game counter, but maybe not.

This Lucky Mark feature heavily suggests that Sora has some sort of mobile device like an iPhone (mPhone? Like for Mickey? I dunno). It looks just like GTA V’s camera phone feature. Kingdom Hearts III comes out January 25th in Japan, January 29th worldwide.

Will you be hunting the Lucky Marks? Let us know in the comments below.