Eh, What’s Up, Hawk?: Skate Jam Could Have Been a Sequel to Space Jam

Since the legendary Space Jam’s 1996 release, rumors of a sequel have been bubbling. Though it has primarily been a basketball movie, there were talks of shifting to skateboarding. Yesterday, Tony Hawk revealed that he was asked to enter talks with Warner Bros. in 2003 to discuss a movie titled Skate Jam. This information was accompanied by an image of Tony Hawk skating with a couple of Looney Toons characters on his Twitter page. Now we are left wondering about the moviethat could have been. 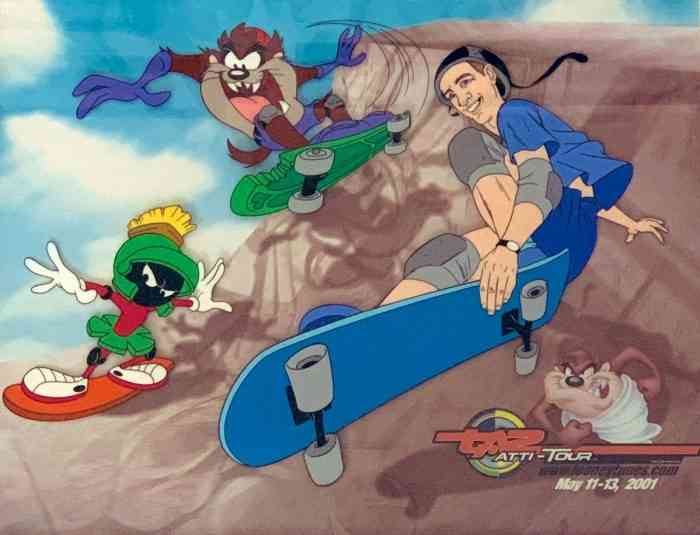 The movie was meant to begin production in 2003. That was a time when Tony Hawk video games were at the height of their popularity. Popularity which would suffer an imminent drop. It was right around the time Tony Hawk’s Underground was released, following Proskater 4 and followed by Underground 2. This was also the year that Looney Toons: Back in Action was released. With the movie starring Brendan Fraser, how could success possibly elude them? Well, whatever happened happened and Back in Action bombed.

The future of Looney Tunes movies was riding on the broad shoulders of Brendan Fraser, but unfortunately Back in Action became a pothole in Looney Toons’ road to further success. This affected the possible Skate Jam movie, which was quickly abandoned. Though today we would have liked there to be a Tony Hawk/Space Jam movie, but he has probably aged out by now and there is no new blood from the pro skating community that has the star power the Hawk name holds. However, I am more than happy to be proved wrong, Mr. Hawk. There is still that Space Jam sequel starring LeBron James coming out sometime in the next century. With Black Panther director Ryan Coogler producing it, we can expect great things from it.

The Skate Jam name did live on beyond Warner Bros.. Last year, Tony Hawk’s Skate Jam was released as a mobile game. This was developed by Maple Media and is meant to be a spiritual successor to the publisher’s Skateboard Party series.

Would you have liked to see a Skate Jam movie? Let us know in the comments below.