Now we just need a GTA mode in Rocket League

Rocket League has been an immense success since its launch. It’s like NASCAR meets Soccer. It’s not surprising that other games want to get in on the action. Even already successful games like Grand Theft Auto are trying their hand. Rockstar has made introduced their own Rocket League game-type Bomb Ball. If you know how to play Rocket League, you know how to play Bomb Ball. With some arena differences and GTA controls, they are pretty much the same: Use car, get ball into goal, blow up. This is part of GTA Online’s Festive Surprise 2018. 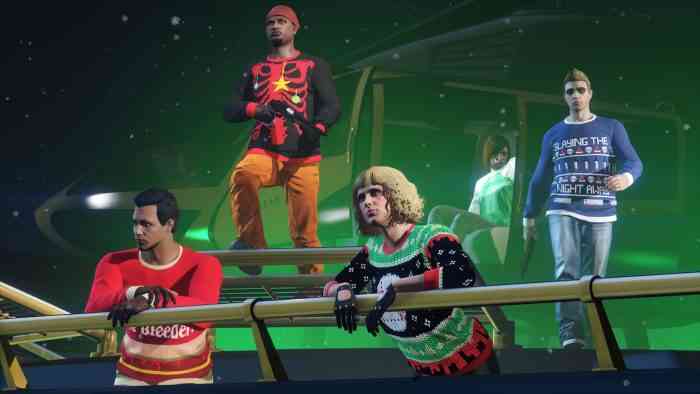 The Festive Surprise 2018 is already underway. Starting on December 25th, players who log in to GTA Online get bundles of items, courtesy of Rockstar. Some of these items are non-exclusives like molotov and grenades, but there are a ton of festive sweaters and liveries for various vehicles throughout the event. In addition to the gifts, players can get double rewards from certain missions, and major discounts on Operations gear and Smuggler’s Run vehicles. These are available until January 7th. Until January 14th, players who participate in Arena Wars games will be given double rewards as well. All of these offers are detailed on Rockstar’s Festive Surprise 2018 post.

Nobody wants to say that Rockstar has stolen game-types, but players have clearly created custom maps that imitate other games. PUBG-style battle royale games (Both user created and official), The Last of Us multiplayer mods, and other game-types are available if players want to experience other games with GTA V. Let’s not forget vehicles that definitely are NOT copies of famous vehicles from other IPs. The Vigilante, Deluxo, Ruiner 2000, and Shotaro are all cars and motorcycles that aren’t from Batman, Back to the Future, Knight Rider, and Tron.

What do you think of this “new” game-type? Are you reaping the rewards of the Festive Surprise 2018? Let us know in the comments. Be sure to keep up to date with all our Rockstar news on our site.

Rockstar Games Parent Company Responds to GTA 6 Speculation
Next
The Last Console Deals of 2018 Are Sure to Save You Fat Stacks
Previous
Chinese Government Approves 80 Games After Ban, But Still No Fortnite