Update: YouTube has since reinstated Shirakko’s channel and received an age gate for his content. As it turns out, he did not violate their terms of service but incited a knee-jerk reaction?

Keem, thanks for your input. This was flagged this AM to me. The videos were re-reviewed, and we determined they should be age restricted, as they were not Community Guideline violations. The channel will be reinstated. All 8,000 videos will be rolled back to his channel.

At Least, He Didn’t Get a Bounty

Some of the best games allow freedom of choice, granting players the agency to make meaningful decisions. Our latest example is Red Dead Redemption 2, an open world filled with realistic interactions, activities, and events. If you partake in murder, then you suffer a loss of honor and a possible bounty on your head. If you kill feminists and glorify the act on YouTube, you get banned… Consequences.

Red Dead Redemption 2 is a game set in an era before women could vote in the United States. As such, it includes many suffragettes, women who fought for a voice in government. In retaliation to liberals of the modern day, or as a perverted way to vent frustration (or both), YouTuber Shirrako uploaded videos of his character brutally killing, beating, or otherwise mutilating female NPCs. Just about every header carries the term “feminist” alongside some awful deed. Several videos later, he was banned for violating YouTube’s terms of service.

Shirakko had about 500K subs when his channel was taken down, which may be why he decided to fight YouTube on the matter. According to him, “You spend the entire games murdering men and no one cares, punch a woman and you get banned, are you out of your mind,” and then he appealed to other YouTubers for help. Therefore, we can probably expect more videos about his terrible decisions. 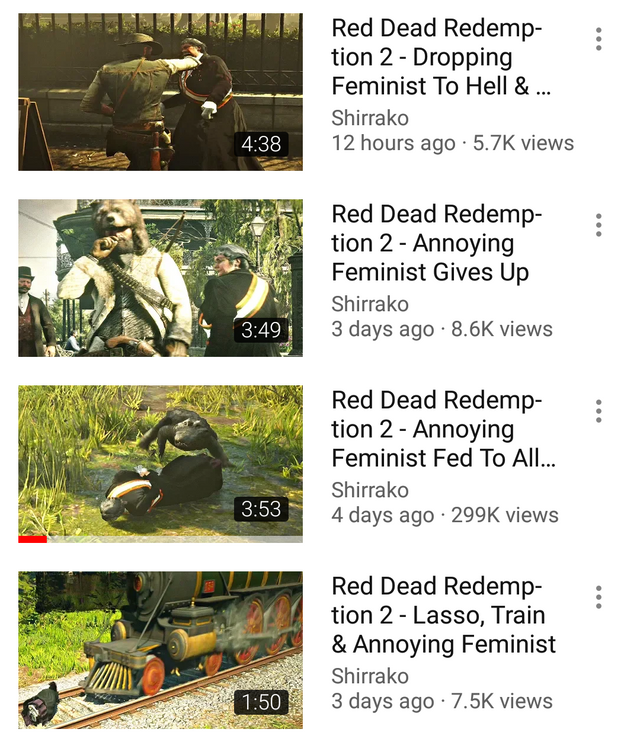 As you can see, Shirakko does more than just “punch a woman” in his videos. A report from Motherboard shows us the kind of viewers he rallied, which created something dank—or typical—out of the comments section. While you can argue that the actions are relegated to a game and do no harm, the message created a bubble of hate that YouTube does not tolerate. The bubble has burst. 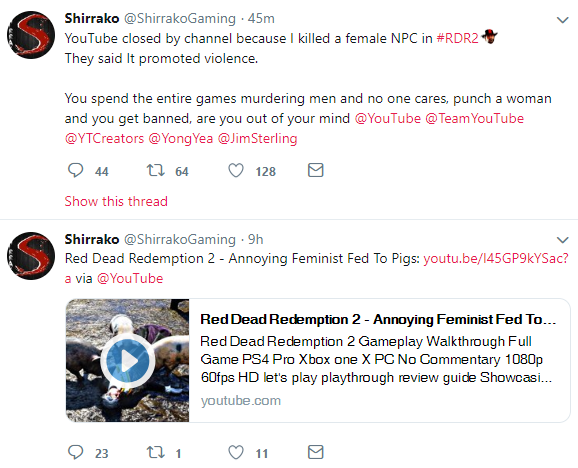