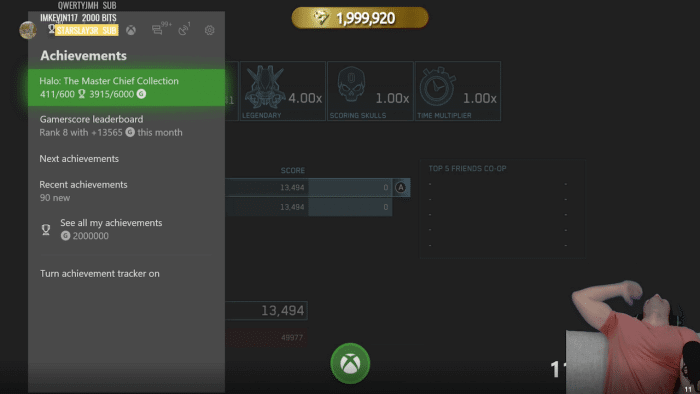 The moment was streamed live on Twitch (which you can watch here) to commemorate the achievement. Ray also chose to play Halo 2 from the Master Chief Collection to be the game he played when he hit the milestone.

“I’ve been searching for a proper achievement title for weeks and I just couldn’t find anything,” he told Guinness World Records. “Halo is my favourite franchise so when I fired it (Halo: The Master Chief Collection) up while searching for a game, it hit me that it should be the game I use.”

Ray shared the news with his followers online where he received a ton of praise. Xbox also sent him a special Xbox One controller engraved with “2,000,000 G” on the front.

“So, I used a special controller for the 1 million milestone (sent by Xbox) and now I have the two million one to use for this milestone. I use them once for the achievement that gets me to the milestone and never use them again. I just display them.”

In 2014, Ray made the Guinness World Record for being the first person to hit one million Xbox Achievement points. That earned himself a lifetime Xbox Live Gold membership from Microsoft and a huge Twitch and Twitter following. Ray unlocked his first Achievement back in 2005 with Hexic HD; ever since then, he’s been hooked.

So is Stallion83 now working towards hitting three million points? While he isn’t entirely sure he will, he said to Guinness that “I’ll always love video games and achievements and I’ll always be playing and going for them.” I guess we’ll just have to wait and see.

Let us know what your Gamerscore is at in the comments section below.


The Medium Custom Controllers Being Sent Out By Bloober Team

Among Us Developer Assures Fans That Updates Are Coming
Next
Zelda: Breath of the Wild Will Never Be a Part of the Official Series Timeline
Previous
‘Nier: Automata Game of the YoRHa Edition’ Is a Thing, but What’s New?