Nintendo has sneakily slipped a new version of the original Legend of Zelda into Nintendo Switch Online’s NES library. Let’s take a look! 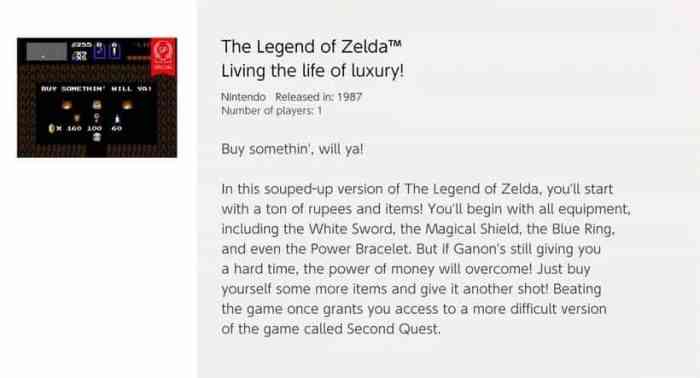 Titled “The Legend of Zelda (Trademarked) Living the life of luxury” (it rolls right off the tongue!), the new version of the game starts players off with just about everything, allowing them to swiftly plow through the world and rip Ganon limb from limb, just like Miyamoto intended. Upon completion a “more difficult version of the game called Second Quest” will be available to players.

Seeing as this literally just dropped, not much is known about the Second Quest version yet, but it’s cool that Nintendo is trying to keep older titles that may be harder for today’s impatient youth and instant gratification loving adults interesting in the modern day. Here’s hoping we see some more of this in the future!

In other recent Zelda news – well, not much has happened really, aside from Nintendo giving Breath of the Wild a bullshit place in the already hotly debated series timeline. Let us know if you’ll be trying out the new Life of Luxury version in the comments below, and keep it locked to COGconnected for all the latest gaming news!