Exclusive Switch Online Perk Can Only Be Used in Tabletop Mode

Additional information has been uncovered surrounding the Switch’s exclusive NES wireless controllers announced during Nintendo’s September 13th Direct. According to the fine print on Nintendo’s official website, the NES controllers’ main purpose is to play the NES games that come with Nintendo’s new online service. 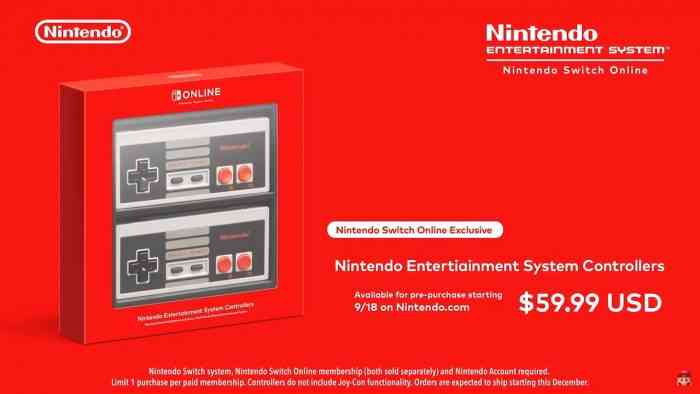 Here’s what the blurb says:

If you thought they might double as extra Joy-Con controllers for use in other games like Mario Kart 8 Deluxe, it looks like you’re out of luck. It also appears that playing classic games in handheld mode is completely out of the question. Sliding the controllers onto the console unit is only necessary for when you need to charge them.

The NES wireless controllers are exclusive to paying members of Nintendo Switch Online, which will officially kick off on September 18th.

In related news, it’s been confirmed that a weekly internet check-in is required to keep playing the classic NES games. If you’re unable to connect back online once seven days have passed, you won’t be able to play them.

You can find out more about Nintendo’s online service by clicking here.

Are you disappointed that you can’t use the NES controllers apart from playing NES games? Do you think a patch could remedy this situation?

Leave us your thoughts in the comments below.

Splatoon 3 Multiplayer Review – Back And Better Than Ever
Next
Take-Two CEO: Cross-Platform Play & Streaming Might Be the Future of Gaming
Previous
Bethesda’s Pete Hines Is ‘Privy To Some Stuff’ About Next-Gen Consoles