Nintendo Sues The Heck Out Of Major ROM Sites

Not Legal After All, It Seems

Nintendo is pursuing legal action against two major ROM sites, LoveROMS.com and loveRETRO.co, for multiple counts of copyright infringement. While the legal implications around ROMs have been hotly debated for years, it’s still pretty rare for a site to get targeted. With this impending court case, it looks like Nintendo is finally taking action. 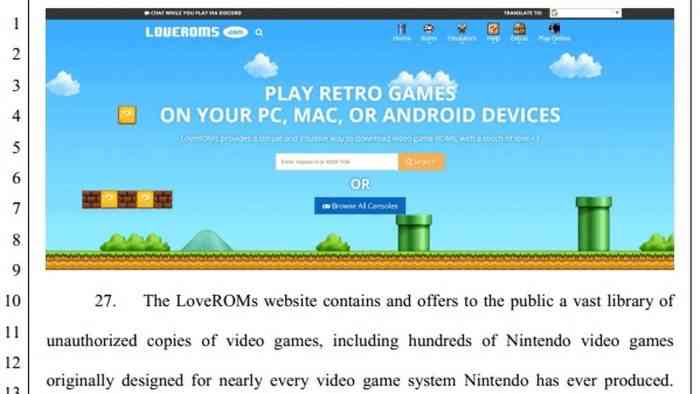 According to the lawsuit, the proprietors of these sites “reproduce, distribute, publicly perform and display a staggering number of unauthorized copies of Nintendo’s video games, all without Nintendo’s permission.” Both LoveROMS and LoveRETRO are owned by Jacob Mathias of Mathias Designs LLC. Nintendo sees Mathias and his sites as “sophisticated parties with extensive knowledge of Nintendo’s intellectual property.” Rather than hobbyists or casual gamers, these guys are a force to be reckoned with, or so they’re described in the lawsuit.

Whatever the actual legal status of ROMs may be, Nintendo is a company that’s famous for protecting their intellectual property. Hobbyists and hardcore pirates would be fools to ignore this sort of opening salvo from the Japanese gaming giant. If this lawsuit is any indication, Nintendo is going to be ramping up their anti-piracy efforts for the foreseeable future. Also, I’m hopeful that this sort of aggressive protection of their old games is an indication that Nintendo is re-entering the ‘play our old games’ phase of their business strategy.