Nickelodeon Kart Racers is a new Mario Kart-inspired console racing game that stars a whack ton of classic and iconic Nickelodeon animated characters. It is being developed by Bamtang and published by Game Mill Entertainment. 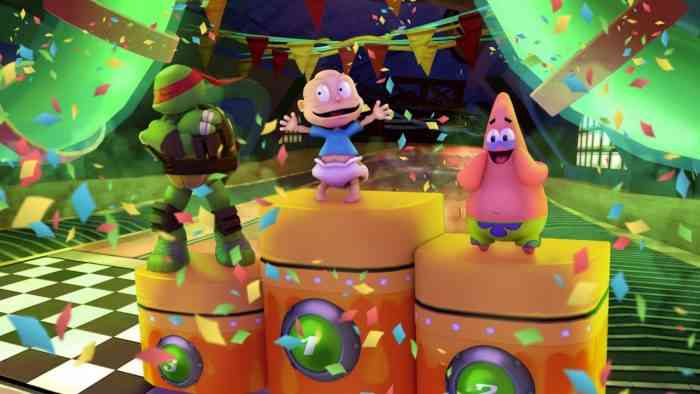 All your favourite characters from SpongeBob SquarePants, Teenage Mutant Ninja Turtles, Rugrats, Hey Arnold! and more are featured in the game. Nickelodeon Kart Racers will have characters from 12 different Nickelodeon shows and will include 24 Slime-themed race tracks based on Bikini Bottom, the New York City sewers, Tommy Pickle’s house, Arnold’s school, and more. Driving over slime will turn your kart into a jet-ski for better manoeuvrability.

“We are thrilled to be partnering with Nickelodeon to bring all of these amazing characters into one fun, competitive video game for fans of all ages to enjoy,” shares Mark Meadows, Partner of GameMill Entertainment. “Nickelodeon has created characters and stories that are loved around the world and we specialize in transforming treasured characters and stories into playable entertainment for the die-hard fans and casual gamers alike.”

The game will feature a team-based co-op mode, four-player free-for-all local multiplayer, and a battle mode to win cups and various Kart upgrades. Similar to Mario Kart 8 Deluxe, karts can be customized and upgraded and power-ups on the tracks will allow for special attacks.

Nickelodeon Kart Racers will launch on October 23rd for Xbox One, PS4, and Nintendo Switch. It will cost $39.99 USD.

What are your thoughts on the new racer? Leave a comment down below.


Get Ready For Nostalgic Battle With Nickelodeon All-Star Brawl