Pirates of the Caribbean Blast Their Way into Kingdom Hearts 3

Kingdom Hearts 3 is everywhere you look at E3. First it’s showcased by Microsoft, then Square Enix and now Sony! While we may have gotten a brand new look at the world of Frozen yesterday, now it’s been revealed that Kingdom Hearts 3 will include the merry band of pirates from Pirates of the Caribbean.

If you’ve been waiting for even more Kingdom Hearts, don’t worry because E3 did not disappoint, as Sora and the gang will now be joined by Captain Jack Sparrow and his crew from Pirates of the Caribbean. While the trailer showcased by Sony showed off this entire world, it also captured a bunch of the other worlds to expect. From Hercules, to Buzz Lightyear and Frozen, you can check it out below.

Oh and if the trailer and the addition of the characters from Pirates of the Caribbean just isn’t enough, Sony also took the opportunity to announce an all-in-one package including all of the previous games, as well as a limited edition PS4 Pro. You can find out a screenshot of the slick console below. 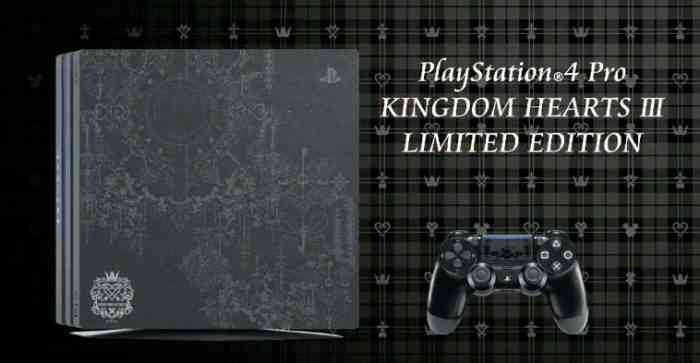 Kingdom Hearts 3 is set to drop January 29th, 2019 over here in the West and January 25th in Japan. The game will be available for both the PS4 and Xbox One and it’s available to pre-order right now.  Are you excited about the latest game in the franchise? Let us know in the comments below and don’t forget to keep it locked for updates and all of our E3 coverage!