Prey developer Arkane is teasing new content for the cult hit via new achievements that have been added to the titles PC version just this morning. 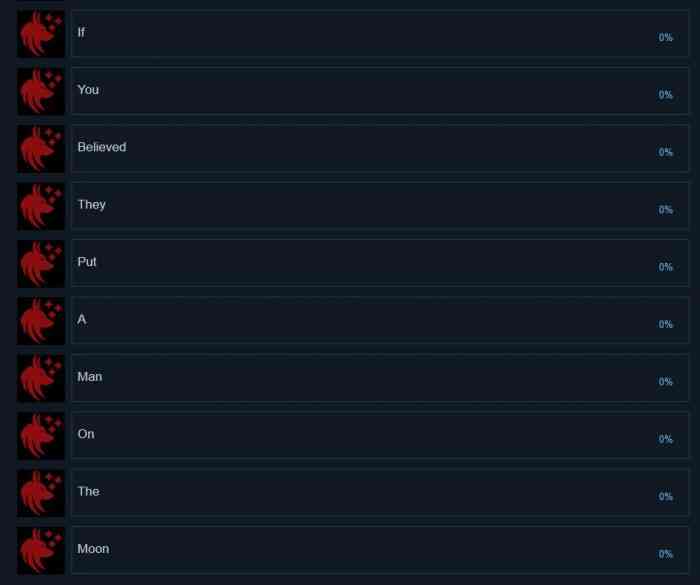 As you can see, the achievements descriptions are only one word each, and together spell “If You Believed They Put A Man On The Moon.”Of course, this is a lyric from R.E.M.’s “Man on the Moon,” from the album “Automatic for the People,” and featured prominently in the Andy Kaufman biopic of the same name.

The accompanying images seem to have no relation to any of the other achievements contextual images. However, you may recognize them from this totally gross picture of Arkane staff sharing red eye with each other.

As you can see, two members of the staff are holding the new image in front of them. There’s various other teases strewn about the image as well, most notably on the whiteboard to the right, which features the date for Bethesda’s E3 conference, and words such as “Moon??” “Kasma Corp??” and most interestingly, “Moonshark!!?”

According to reddit user SHAPE_IN_THE_GLASS, the aforementioned Anubis logo is that of Transtar rival Kasma Corp, which has since gotten its own real-world Twitter and Reddit accounts.

a Great meMory: thRee thINGs caNNOt be lOnG hidden: the sun, the MOOn, AnD the tRuth. pic.twitter.com/VHQQM2T05n

Rearranged, the uppercase letters spell “Good Morning Morgan,” a common phrase in the game and its marketing. There’s also this unsettling tweet that went out the exact same day that Bethesda’s E3 briefing was announced:

Do we really know what’s out there? pic.twitter.com/TIByM1O738

Naturally, during the writing of this article, fans have already begun trying to unlock each achievement, with reddit user judgedead53 claiming to have unlocked “You” by killing a certain key character near the end of the game. Shortly after, SHAPE_IN_THE_GLASS received a binary message from the KasmaCorp account, which translates to “Attention Everyone. This is an emergency broadcast. Let’s get to work. We have an extra special message today.” Then, SHAPE posted this short video:

Since then, judgedead53 posted each individual frame from the video on imgur. Here, you can see a door that leads out onto what clearly looks like some sort of moon base, confirming that the yet to be announced additional content would take place on the moon.

We’ll be sure to keep you updated as this story progresses.

What do you guys make of all this? Are you excited to return to the world of Prey? Let us know in the comments! While you wait for fans to decipher more of these teases, or for Arkane to release their “special message” for today, check out what Devolver is doing at E3 this year, and what to expect from the Xbox version and NEXT update for No Man’s Sky.