Here Are the Details of Monster Hunter World’s First DLC

Hello hunters. Last night, Capcom brought us a few gifts in the form of announcements. The release date for the first free Monster Hunter World DLC was revealed, alongside new images of weapons and armor, and a new in-game event. 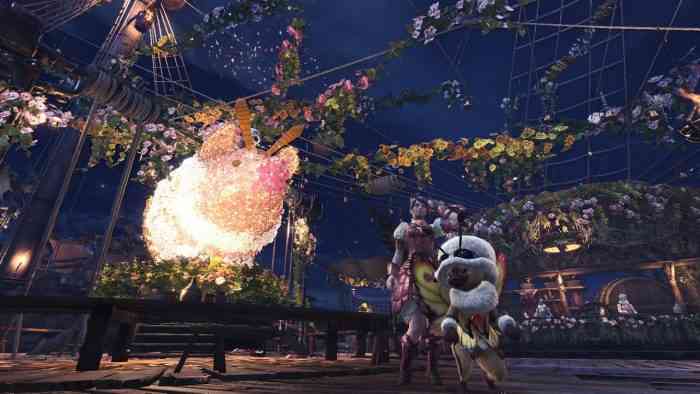 Starting things off, the new monster Deviljo will arrive on March 22nd. Just like every single monster in the game, his existence will offer players a brand-new armor set to obtain. Along with a male and female deviations of the Deviljo armor set, there will be a new upgrade tree for all 14 weapons. Slaying Deviljo will grant you the materials to craft these weapons whose sharpness reach white levels. In case you weren’t aware, this DLC and all its items will be free. Players will also have the ability to completely alter the character appearances. However, after the first time, additional alterations will only be available via microtransactions.

Next, starting on April 6, the Spring Blossom Fest in-game event will commence. During this event, there will be new daily activities so players can squad up and obtain the community-created Great Sword. That’s right; there will be a new weapon in Monster Hunter World in the form of the Great Sword Wyvern Ignition. Participation in the community event will grant you the items necessary to build this beast of a weapon. You will have until April 20th to enjoy these features.

As an added bonus, the Horizon: Zero Dawn collaboration event that lets you unlock Aloy’s skin will return for the Spring Blossom festival. Last but not least, Capcom will be giving out tickets that will let players reskin their Palicos into a Voxel Mega Man. Expect more cosmetic rewards once the update arrives next week. There will be plenty of activities during this period, so mark March 22nd on your calendar.

A final tidbit that seemed worth mentioning: the Devil May Cry event in which players can acquire Dante’s skin will offer each slot as an individual piece of armor. Meaning, If you just want his coat or his head, then you can craft it and match it with other pieces of armor. Pretty neat, right?

Capcom Confirms They Have “No Plans” to Bring the Original Monster Hunter Stories to Switch
Next
Nyko is Having a Tax Season Savings Sale; Deals on Switch, SNES Classic and VR Accessories
Previous
Insomniac Games Chose Spider-Man Over Other Marvel Heroes