Including Cross-Play With PC and Xbox One

Chainsawesome’s asymmetrical invisible vs invincible shooter, Aftercharge, is coming to the Nintendo Switch! You know what that means: it’s another installment in the never-ending Great Nintendo Indie Absorption! Once again, we take a closer look at the newest game to be trapped in Nintendo’s pulsating eldritch maw, ready to find a second life in the hybrid console’s quivering flesh. 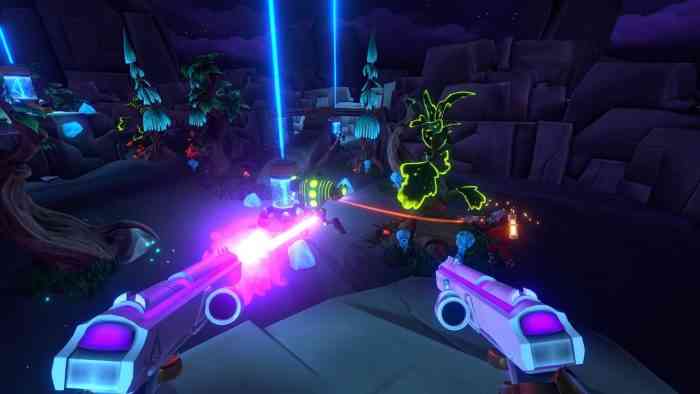 Aftercharge is an arena shooter where one team (the robots) are invisible, whereas the other team (the security guards) are invincible. Revives are instantaneous, abilities have zero cooldown and the matches move crazy fast. Your goal is to either attack or defend the extractors, six glowing structures scattered around the map.No matter which team you’re on, it sounds like the games get somewhat insane. Which I’m down with, personally.

The team at Chainsawesome is working to ensure that cross-play functionality allows PC, Xbox One and Switch players to connect without any troubles. While the Switch version doesn’t have a concrete release date outside the summer of 2018, there will be a playable demo at PAX East. There’s also a new gameplay trailer, embedded below, if you want to know what a match in this game could possibly look like. So fast!