“Rapid Packed Math” May Change the Playing Field for Everyone

RX Vega will introduce, for the first time in Desktop GPUs, the Rapid Packed Math feature. This allows two half-float operations (FP16) to be executed at the same time it would take for one full-float operation (FP32). From AMD’s promo statement:

“Next-Gen Compute Units (NCUs) provide super-charged pathways for doubling processing throughput when using 16-bit data types. In cases where a full 32 bits of precision is not necessary to obtain the desired result, they can pack twice as much data into each register and use it to execute two parallel operations. This is ideal for a wide range of computationally intensive applications including image/video processing, ray tracing, artificial intelligence, and game rendering.”

In other words, it makes me high-end graphics faster to load so’s I’m not pissed off at de-res’d textures. Forget all the rest of that “work, I’m an engineer so I use the GPU to do computations A.I. blah-blah-blah” stuff. 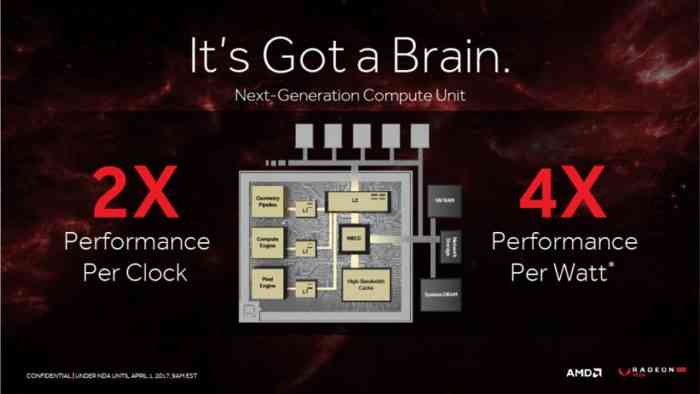 Just ahead of the PS4 Pro launch, System Architect Mark Cerny revealed that the console would include a couple features from AMD’s future roadmap. One of these is what AMD is now calling Rapid Packed Math; Cerny said that it has the potential to “radically increase performance”.

One of the features appearing for the first time on the PS4 Pro is the handling of 16-bit variables – it’s possible to perform two 16-bit operations at a time instead of one 32-bit operation. In other words, at full floats, we have 4.2 teraflops. With half-floats, it’s now double; 8.4 teraflops in 16-bit computation.

In walks another spicy rub: AMD revealed last week that Wolfenstein II: The New Colossus and Far Cry 5 will support Rapid Packed Math. Looks like AMD be talkin’ to the developers and maybe offering incentives?

Right now we’re in kind of a holding pattern to see where the industry chooses to go. Will it use the Rapid Packed Math roadmap and the PS4 Pro gets a leg up on Xbox One X, or will it stay the course with raw, UNCUT power to brute force these 32-bit operations? Hmmm, seems like they’ll use AMD’s technology. But how will nVidia feel about that, the titan of gaming hardware as of late. It’s a battle between BetaMax and VHS, HDVD and BluRay, and … Chili’s or Applebee’s? Virtually the same, except Chili’s has the new Chicken Crispers in Sweet Teriyaki, HOT BBQ, and Pamesean Garlic. Ha ha, Chili’s please give me money!