And Each Boss Only Gets Tougher

From the creative individuals at Dark Star comes a new RPG that sees the player on a path toward redemption. And it’s not about leveling up and beating bosses to the ground. It’s about wielding your weapons to the best of your ability. Behold Sinner: Sacrifice for Redemption.

Sinner is an action-RPG that revolves one man’s quest to defeat the Seven Deadly Sins. Yes, it carries much of the Dark Souls vibe, but the same is often said of any game that’s difficult. And this one is expected to be tough. Before the start of each boss fight, players must sacrifice one of their own stats. Utilizing one of many unlockable weapons, you must then rely on skill to beat opponents:

“Sinner is not another game where the player grows stronger to fight the final boss on equal footing,” says Iain Garner, Director of Developer Relations at Another Indie. “Adam will struggle with his physical prowess as well as his internal need for atonement, and his ultimate test will be his most challenging.” 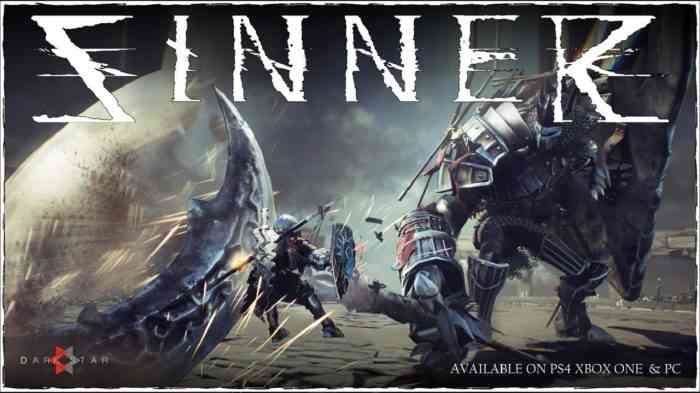 Additionally, Sinner represents the effort of AAA veterans. Dark Star Games includes a former Ubisoft art Director, a Blizzard technical artist, and a Konami senior programmer. With their help, the game has been made playable a Gamescom. Available for the first time in hall 3, stand D-01B, booth 370. After that, we’ll see it again at PAX West, booth 7315.

Lastly, Sinner: Sacrifice for Redemption will be localized in English, Spanish, German, Japanese, Russian, Simplified Chinese and Traditional Chinese. Published by Another Indie, the game is slated for release in Q1 2018. For more information, you can visit the official website. Stay tuned for more details as we near release.

“Let Me Solo Her” Will Stream 1000th Victory Over Malenia in Elden Ring
Next
Titanfall 2 Now Free on EA Access, Virtually a Steal
Previous
PLAYERUNKNOWN Tops Steam Player Counts for a Non-Valve Game