Forza 7 First Demo with a Real Porsche on Stage

Forza had boasted that it was able to run in 60 fps with Native 4K on the Project Scorpio dev console with relative ease. Today was the day to ante up, and Forza did in a big way, being the first demo of the new Xbox One X fleet of games. Forza 7 Motorsport blasted onto the stage with Turn 10’s Creative Director Dan Greenawalt narrating the all the new features – and cars – of Forza 7. We even got to see the first look at the real-ass 2018 Porsche 911 GT2RS on the stage!

The demo showed off the beautiful collection of over 700 cars – the largest yet for the franchise – but the cars aren’t the only beautiful things to be had. Forza 7 also features a dynamic weather system that’s the most in-depth yet; variations on puddles, rain accumulation, clouds breaking, revealing the sun and drying out the race track, THE POWER OF WIND – all affecting how your car performs. The mirrors friggin’ shake! This minutia of detail makes the driving experience very authentic. 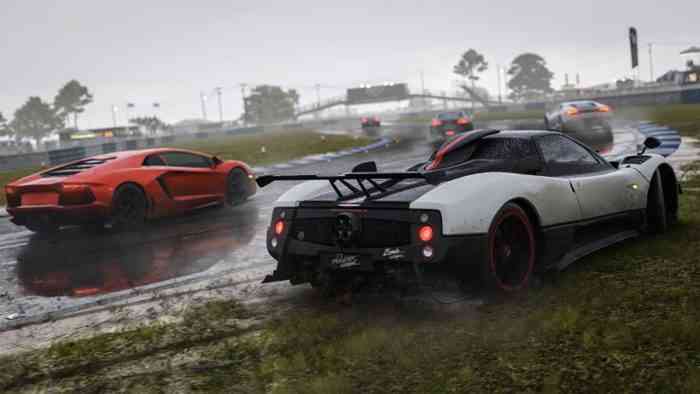 Joined by Shannon McIntosh – Porsche driver coach and race driver and Verena Mei – stunt driver to the stars, Greenawalt showed off two environments for these racy ladies to race in: Dubai’s mountain pass of dry, rocky terrain, and Nuremberg’s race track in the pounding rain.

The big selling point was racing the car that was on the stage, and they looked comparable. Forza has always paid close attention to detail on the cars, and the droplets and dirt accumulated on the cars was a nice touch.

Forza 7 will be available on Xbox One X and PC on October 3rd.