Necropolis Special Edition is Available for Pre-Order For PS4, Xbox One and PC

Punishing As F&!k Necropolis Special Edition Up for Pre-Order

Bandai Namco announced today that they, along with Harebrained Schemes, the creators of the Shadowrun Returns series and recently announced BATTLETECH PC games, have partnered with iam8bit to birth a beautiful Collector’s Edition for the diabolical dungeon delve, Necropolis.

The Necropolis Collector’s Edition will be available on all platforms. It will be published on Steam by Harebrained Schemes on July 12th. The PlayStation 4 and Xbox One versions arrive later this summer. 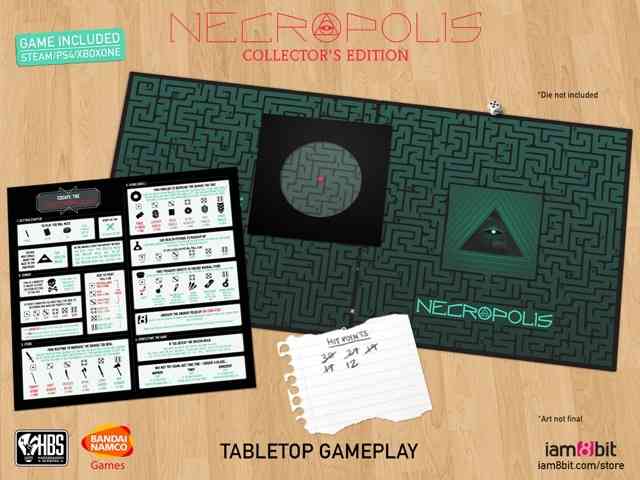 The Necropolis Collector’s Edition is available today for preorder for $50 via the iam8bit store, and is a Vinyl Soundtrack that includes a game code to the full game and many game-inspired items, including: 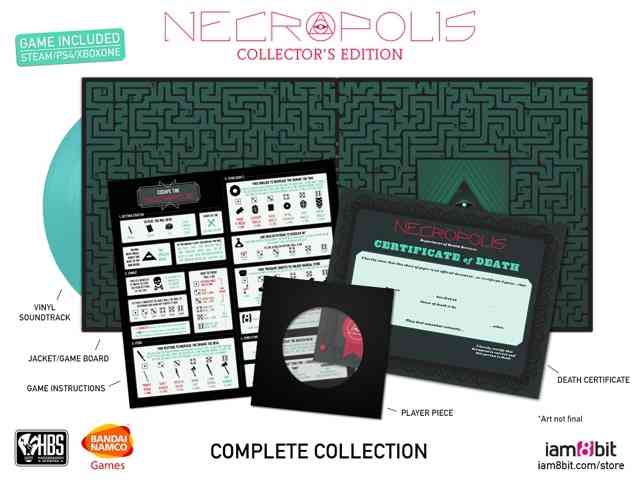 You play as a nameless adventurer attempting to escape a living, magical dungeon that reconstructs itself each time you play, with only one way out – down. Craft, equip, explore, and fight to stay alive as you delve deeper and face ever-greater threats in the twisting halls and endless chasms of the Necropolis. Have no doubt; you’re going to die – often! – but you’ll improve your combat skills, available upgrades, and dungeon know-how with every playthrough, bringing you one step closer to the exit.

Additional Details about each of the Necropolis Collector’s Editions feature:

Necropolis Game Code – A digital download code for the full-version of Necropolis on your choice of platform is included with every vinyl order (Steam, PlayStation 4 or Xbox One). Codes will be distributed via email in advance of the game’s release date on their respective console.

Soundtrack – composed by Jon Everist (Shadowrun: Dragonfall, Shadowrun: Hong Kong, BattleTech) and pressed onto 180-Gram transparent blue vinyl. As with all iam8bit music releases, this collection is mastered specifically for optimal vinyl audio quality. The full soundtrack will also be available to each purchaser via digital download, with redemption codes sent via email.

Pen-and-Paper Dungeon Crawler – The album art doubles as a classic D&D-style game, including an instruction sheet and player piece. Players beware – it’s nearly impossible to navigate the maze without dying, but those who do will revel in the hard won bragging rights of success.

Album Art – designed by Steve Courtney, this unique cover pays homage to the punishing, maze-like architecture of the game. In addition to its engrossing artwork, the jacket features an embossed logo and a die-cut Brazen Head pupil that reveals a pop of fluorescent color beneath (on the sleeve).

Bandai Namco’s Gundam Evolution Has Officially Launched On PC
Next
The Steam Summer Sale – How To Raid Their Picnic Basket
Previous
Fallout: New Vegas and 7 More Games Now Available on Xbox One