In what could be seen as record timing, Valve Co-Founder Gabe Newell has (possibly) joined the Twitter-verse, and he has taken no time in stirring up what could be either a massive troll, or some long, long awaited news. Gabe Newell tweeted the following earlier today, after joining the social media platform. Could a Half-Life 3 announcement be in the E3 pipeline? The account remains unverified so some healthy skepticism goes a long way, but until that’s the case or we hear otherwise from Valve’s mouth, this is still up in the air either way. 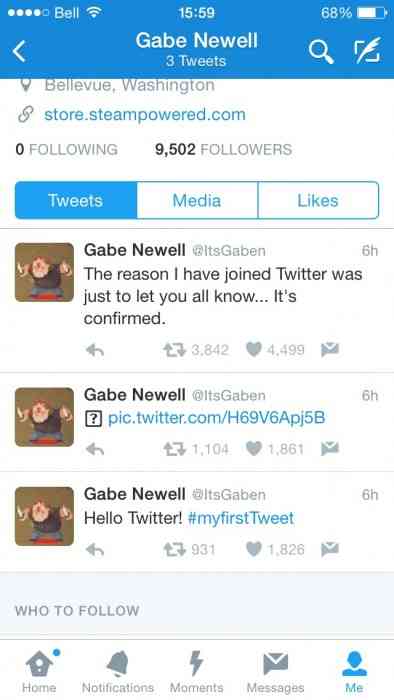 Suspicious timing, considering E3 is less than two weeks away. This could either be the man himself, or it could just be another person trying to stir the pot before a huge event. Half-Life 3 has been a highly sought-after title considering the massive cliff-hanger the series left off us out on. Valve’s been relatively busy otherwise, plugging away on all manner of things Dota 2 related, but to see them shift gears back to the franchise that made them famous would settle the claims of “Vaporware” while also building a huge amount of hype towards a game that a lot of folks have clamored for for a very long time. Half-Life 2 set the bar for graphics when it first came out, and it also pioneered the episodic format of titles that are so popular today. Could Half-Life 3 set the bar again in a new, groundbreaking way?

Episode 2 for Half-Life came out way back in 2007, and it has been close to a decade without any sort of tangible announcement. Speculation has been all over the place, without any real tangible news. Source 2 ended up having Dota 2 serve as the pilot on its maiden voyage. A lot of other possible announcements have ended up being completely unrelated, so it’s only natural that we here at COG are also holding out for actual information, but the timing of Gabe joining Twitter, along with the timing of E3 make an impending Half-Life 3 announcement worth getting (possibly) excited for (please don’t hurt my heart, GabeN) again. Will we finally get to step into the suit of Gordon Freeman for what could be the finale to one of the most popular trilogies? Only time will tell…

Source: Gabe Newell’s Twitter and a healthy dose of skepticism and cautious optimism.

Free Classic Elder Scrolls Games Show Up on Steam
Next
Watch Kirby Get Fired Up In Latest Kirby: Planet Robobot Trailer
Previous
Xbox One Price Officially Drops to $299 Ahead of E3 2016