Trying to build a game around the master of the macabre can be difficult: rarely does someone hit the right tone when it comes to the work of H.P. Lovecraft. So when I tell you a game was made featuring Lovecraft as the villain, and that game happens to be a twin-stick shooter, you probably would turn up your nose in confusion – and discovering who the hero of our story is might shock you…

Developed and published by 10tons Ltd, the studio that brought us Neon Chrome, Tesla vs Lovecraft is a culmination of the kind of game both bookworms and gaming nerds would absolutely love to see. As a twin-stick shooter the game is light on story – reduced to a very short cutscene in which Lovecraft attempts to stop Tesla from showing off his inventions on stage – but the point of this kind of game is not to bog you down in story but rather throw endless action at you, and in this it excels beyond what I had hoped for.

Gamers will take control of Tesla as he takes on legions of eldritch horrors brought forth by Lovecraft himself, but Tesla just happens to be a smart fellow, and he isn’t going into this battle blind. Told from a top down angle, the game is set in a few key areas including an English borough, a cemetery, a Cliffside, and the kind of typical place you would expect to find Lovecraft and his merry band of nightmares. The stages are configured in a variety of ways with walls, fences, boxes, and all manner of delightfully destroyable objects impeding his progress at first, with the eldritch horde able to destroy them in pursuit of Tesla – not to mention Tesla’s own ability to destroy them with sheer firepower. Each stage will see Tesla begin with a simple hand gun and the ability to teleport short distances using electricity (go figure!)

10tons Ltd have thrown in a little RPG to Tesla vs Lovecraft, as Tesla will be able to level up the more demons he defeats. With each level, the player is presented with two perks to choose from with a variety of buffs such as causing a shockwave when teleporting, increasing the rate at which the teleport recharges, or lightning striking the enemy horde every eight seconds. The further you play into the game, the larger variety of perks you will have to choose from, but what really makes this a gloriously chaotic display of destruction is the fact all of these perks can be stacked and multiplied several times. While these will reset with each level you start, the combinations you can make are just mind-blowing; at one point my weapon was doing 60% more damage, firing with five barrels at once, every shot able to pierce enemies and keep going as well as ricochet off of walls AND poison enemies that were hit. Weapons appear randomly on the field, ranging from a revolver to a shotgun, to a fully automatic electrified shotgun, and regardless of what weapon you have these buffs will apply to any gun you pick up. To add to the chaos, if the shotguns buckshot normally fires six bullets per pull, the above buffs would mean each shot would fire thirty bullets at a time! 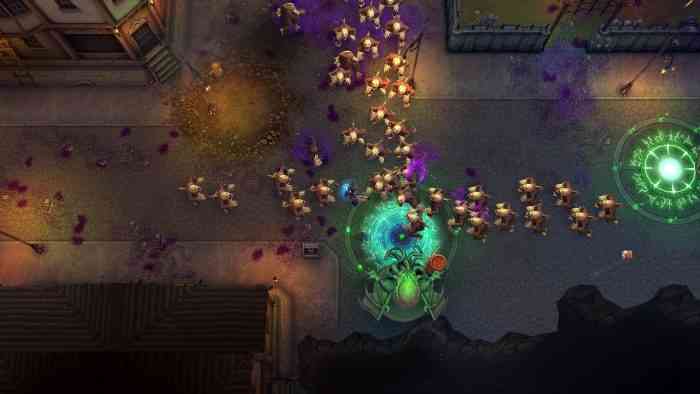 You’ll be presented with a menu in between missions where players can view the map, choose to replay old missions, and even select any previously played mission to tackle in endless mode. The world map has three stages: Normal, Aether, and Eldritch. Each one has a series of missions of increasing difficulty as well as three boss battles that can be overwhelming but incredibly satisfying to overcome. To continue the RPG theme, Tesla can collect special crystals that randomly appear in the stage, can be collected from defeating X amount of specific enemies, and earned from daily challenges. These crystals are a currency used to unlock and boost additional skills Tesla has such as increasing the number of teleportations he can use in a row, starting each stage with a random perk, or increasing the strength of Tesla’s greatest asset: The War Pigeon.

“the one thing I wanted the most out of this game does not appear: the ability to play as Lovecraft.”

The War Pigeon is Tesla’s best weapon in the game: an incredibly durable, full auto mech. Tesla begins every stage with the War Pigeon, whose health is on a cooldown until it runs out and explodes, causing huge damage to nearby enemies. As soon as the War Pigeon is destroyed, the parts needed to rebuild it can be collected across the stage – if you can hold off the horde long enough. Not only is it satisfying to suddenly be in control of a high power mech, but the aforementioned buffs will also transfer to the mech, meaning the potential for absolute carnage just went even higher. The mech can be further improved with crystals, increasing its armor and duration on the field by 10% each time. Having upgraded it twice, I noticed a vast improvement in the amount of damage I could deal at any given time. 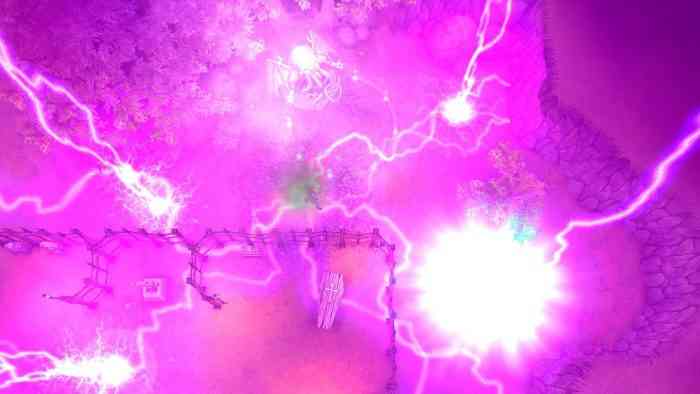 Tesla vs Lovecraft also features multiplayer co-op of up to four players, but sadly the one thing I wanted the most out of this game does not appear: the ability to play as Lovecraft against hordes of robots. To have a title like Tesla vs Lovecraft and not let you play both sides is disheartening – the potential here to control the eldritch and use magic sounds like so much fun yet it doesn’t come to fruition. Maybe it’s an endgame feature I haven’t seen or it’s planned for a patch down the road, but for the time being it feels like an incomplete game without being able to control Lovecraft – especially with multiplayer options abounding.

Tesla vs Lovecraft is a fantastic twin-stick shooter that takes the tried and true genre and adds just the right elements to give the player a strong sense of progression, challenge, and most importantly – fun. I can’t recall the last time I found myself lost in a twin-stick shooter, let alone daydreaming about playing one when I’m not home. With everything the game does right, not being able to play as Lovecraft feels like an oversight that hopefully, 10tons Ltd will address in the future; not only would the inclusion make the game more rounded, it would add a host of multiplayer options to an already phenomenal game. 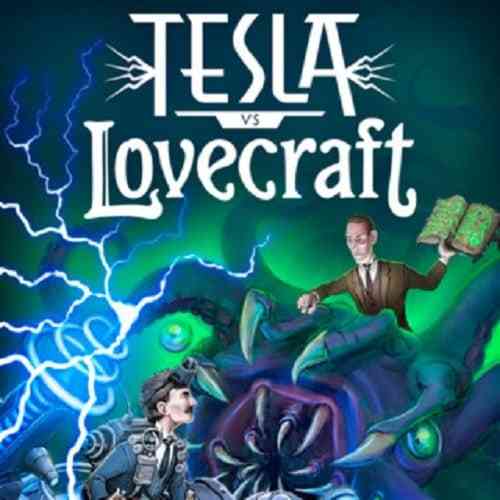