First released on the 3DS eShop last year, SteamWorld Dig has finally made its way to the Wii U. Critically acclaimed and a new fan favourite, Image & Form’s mining platformer makes a spectacular debut on Nintendo’s home console, keeping the same entertaining and addictive gameplay, but adding a few new features that make great use of the Wii U GamePad.

You play as a robot cowboy by the name of Rusty. Armed with an old pickaxe plucked from his uncle’s corpse, he finds himself in the nearly defunct town of Tumbleton. Things have taken quite a turn for the worst with few residents remaining in the quaint western village. But there is hope, as there is an abandoned mine below (left to Rusty by his uncle) that has the potential for great riches to be uncovered. It’s up to Rusty to dig deep into ground to uncover the vast amount of minerals and gems and reveal the secrets that his uncle has left behind. 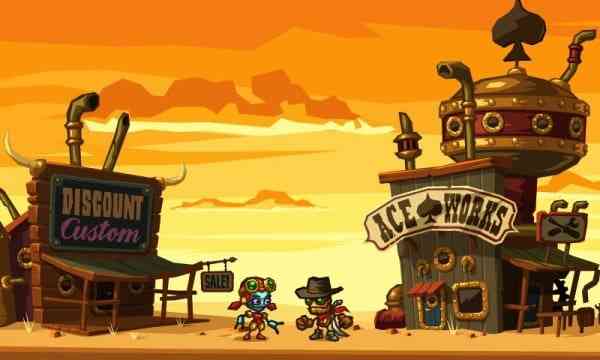 At its core the gameplay is simply digging for minerals, returning to town, emptying your sack, and returning to the mine for more digging. For the first 15 minutes or so I disliked this game. I found the sequence of dig, unload, and repeat to be dreadfully slow and tedious, but thankfully once you gain access to your first unlockable the game really opens up, rewarding players with an incredibly addictive experience.

The minerals that you collect from the chasm below the town are not only traded for cash, but they help to increase the town’s resources, leading to the recovery of the economy. This means better items for purchase in the town’s store, including such things as larger mineral bags, better armor and sharper pickaxes to chip away at different types of blocks within the mine, all which allow Rusty to venture even further below.

You’ll often find yourself quite a distance underground, only to find your bag full yet again. It can grow tiresome, but Rusty’s wall jump somewhat eases the pain of returning to the surface as he can rapidly climb and bounce up corridors. As the game progresses there are transporters that can be found deep within the mines that allow for a quick trip to the town saloon or a visit to Cranky’s Upgrades. 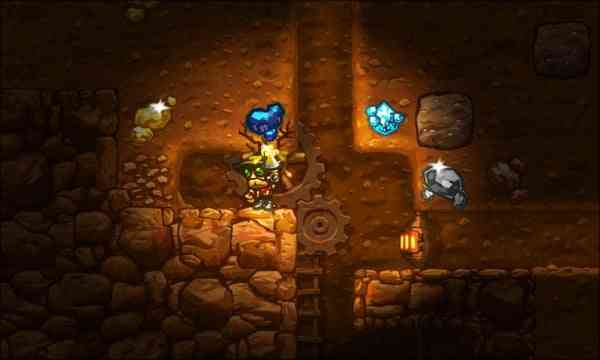 As you discover and reveal more areas within the mine you’ll discover hidden caverns with special goodies left for Rusty by his uncle. These include such items as a lamp to light the way, speedy boots to run across crumbling blocks, a drill to break through the toughest stone, and even steam powered technology that lets Rusty jump high into air or knock out an enemy with a powerful punch. However, these special items require a bit of resource management as many are powered by water and you will often find yourself having to seek out pools and puddles within the mines. Things can get pretty dark down there and this results in you having to also manage your lamp, ensuring there is enough light to see what path lies ahead.

While the primary focus of the game is exploration, there is a fair bit of platforming and puzzles to contend with. Figuring which block to crush to make your way to the entrance of a cavern and crossing pools of oozing green acid or floors of spikes are just some examples. Not unlike a Metroidvania game, new abilities and items give Rusty access to previously inaccessible areas. There is a bit of combat, although not much to speak of. You are warned by the townsfolk of the strange and dangerous creatures within the depths of the mine, but you rarely encounter an enemy that is difficult to defeat. They’re really more of an inconvenience than a challenge.

On the rare occasion that an enemy kills you, or you are crushed by a boulder after you’ve inadvertently dug a path underneath it, you are met with a “Game Over” sign. Death is nuisance and expensive as you lose any minerals you have acquired in your recent exploration. Yet, if you return to the place where you perished you do have the opportunity to collect the fallen treasure. Should you die within a cavern you simply start back at the entrance rather than be forced to make the journey back from town. SteamWorld Dig is not difficult game at all, and you will likely complete it within a few hours, but should you want to return to the mines and the town of Tumbleton again, the maps are randomly generated and no two playthroughs will be the same. 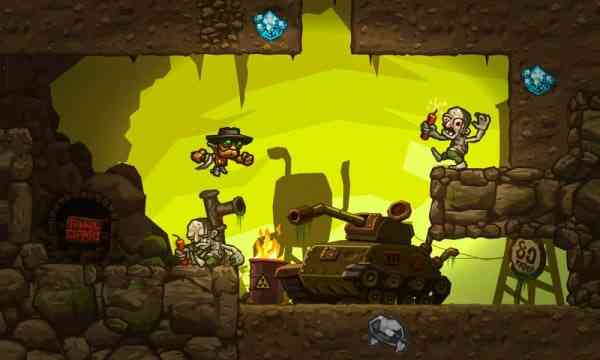 The graphics in SteamWorld Dig were very appealing, perfectly capturing a rustic, western feel. From the cartoonish robots, the quaint desert town, to the dark and dirty mines, everything looked quite nice. I especially enjoyed discovering new environments as I dug deeper, filled with barrels of dynamite, steamworks and gears, and even the remains of miners who met an untimely death. While SteamWorld Dig does offer Off TV play, I encourage players to play on a TV screen when possible to truly appreciate the little details and to have access to the map and inventory on the GamePad screen. As for the game’s audio, the music was fitting and is best described as a twangy western theme. I must admit I was a tad annoyed with the “voice” of Rusty and the townsfolk of Tumbleton. Sure, they are robots and machines, but the grinding metal sound of their chatter was, in my opinion, just plain awful.

Despite a slow start, SteamWorld Dig was a pleasure to play. I’m not a fan of other games that offer a similar mining experience (e.g. Splelunky or Minecraft), but I thought that digging deep into the abandoned mines, uncovering minerals and exploring caverns was extremely satisfying on the WiiU. With a perfect mix of exploration and platforming, randomly generated maps, awesome upgrades and extremely addictive gameplay, SteamWorld Dig is a fantastic game, one that I highly recommend playing.