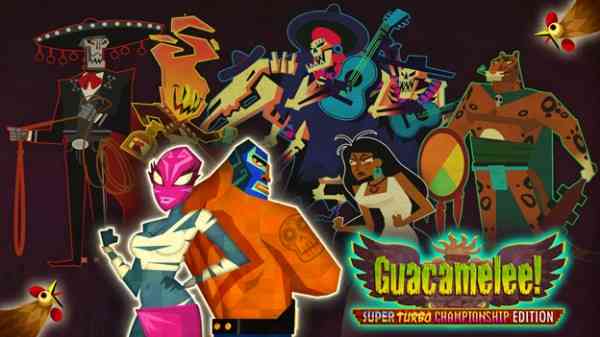 My first experience with Guacameele! was a few years ago at PAX East, where I was able to meet and interview a few of the developers of the game. At that point I really didn’t know much of the game, but after getting some time with their floor-demo, I was instantly in love. The game was released soon after on the PS3, and I enjoyed every minute of it deeply. Now a freshly-updated version has been launched with a bunch of delicious new upgrades to sink your teeth into.

If you’re not familiar with the story, let me fill you in. You play as Juan Aguacate, a simple farmer from a small town. One day El Presidente’s daughter was kidnapped by Carlos Calaca, an evil demon, and poor Juan tries to stop him, but dies in the attempt. He wakes up in the Land of the Dead. There, he is gifted a magical luchador magic by a mysterious female luchador. He puts on the mask and is transformed into a powerful luchador himself, and is promptly returned to the world of the living. His goal is to rescue El Presidente’s daughter before she is sacrificed as part of Carlos’s plan to merge the worlds of the living and the dead and rule both with a bony fist.

Juan still has his wrestling themed attacks which you will use throughout the world to reach certain areas and take out certain enemies. It is still major fun racking up huge combos by pounding on enemies over and over again. As you progress through the game, you unlock new skills and attacks you can mix into combat, adding some great variety to the battles. Some enemies actually require certain attacks to defeat, so you are forced to adjust your tactics accordingly. Similarly, certain coloured blocks require certain skills to break and progress, so parts of the levels become unlocked over time, and back-tracking is encouraged.

Later in the game you gain the ability to switch between worlds of the living and dead, first through special ‘portals’, and later whenever you want. This comes into play during much of the tricky platforming challenges the game throws at you. If I had one issue with the game, it’s that some of these platforming sections can feel almost too difficult at times – however, it feels fantastic when you finally execute the right sequence of moves to get through successfully. Check-points are quite generous too, so you are rarely set back too far if you die. 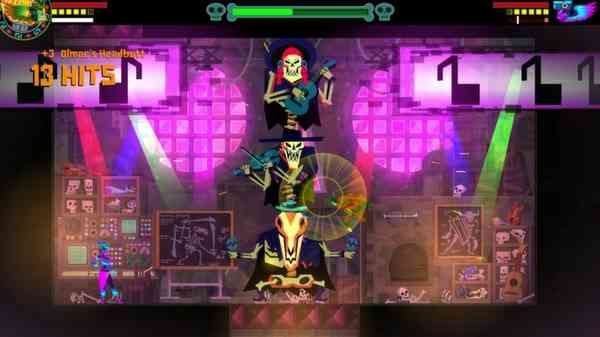 What is new this time around is a new “Intenso” skill, which adds another meter next to your health and stamina bars. This bar will fill during battle, and once full enough, you can unleash its power, doubling your damage and speeding you up slightly for a short period. It can certainly come in handy when things got crazy.

Also new to this version are some new elite enemies, including a new boss that is three times the threat – you will see what I mean when you finally come across him. The world of Guacameele! also got a bit bigger too, with some new regions added to the map, including “El Infierno”, which acts as a challenge area to test your skills and reward you with money, experience, and upgrades.

The overall look of the game is the same glorious colourful cartoon like style from the first time around. I love how the game looks from start to finish with its Mexican and Mayan overtones, and there are many funny references to other videogames and memes in the backgrounds. Everything is well-animated and the characters are full of life. The game itself is crying out for its own cartoon series in my opinion. 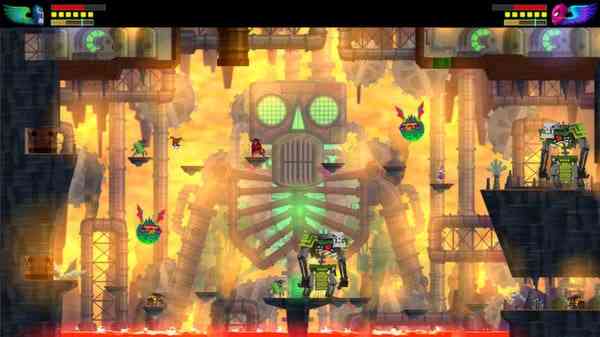 There are alternative costumes for Juan and the mysterious female luchador (Tostada) that can be unlocked during the game. Also the fan community has been creating their own costumes for the game on PC. Some really cool designs can be found on the Steam Workshop.

While traveling the world of Guacameele! you will still be treated to some great music and audio. Punctuated by Mexican guitars and trumpets, this is a soundtrack that suits the game perfectly, and I’d honestly like to add it to my collection. It will have your heart pumping during intense battles, your pulse racing at epic boss battles, and have you grinning ear-to-ear at the more humorous moments of the game. There still are no voice-overs for the characters, but honestly I don’t feel the game needs it.

In the end Drinkbox studios took an already great game, and made it that much better. So lace up your boots, pull on your mask, and dive head-first into the action! This is a must-buy that will be enjoyed by all. ARRIBA!

Next SteamWorld Dig (Wii U) Review – Get Your Mining Fix in the Days of the Great Ol’ West
Previous Tales of Xillia 2 (PS3) Review – It’s not “Exillia”, it’s “Zillia”!