If there is one thing that Shooting games have always needed, it’s more graphic violence.  Well, at least, that’s apparently the premise behind Sniper Elite III, the latest instalment in Rebellion Developments’ tactical shooting series.  Carving out its own niche in the crowded arena of video game shooters, Sniper Elite III offers itself as a sort of “thinking man’s” alternative to the CODs and Battlefields of the world – and has also become famous for its ultra-bloody kill animations.  So, if you have been scoping this one out, looking to pull the trigger on purchasing it, you might be wondering, does it hit the target?

From the start, it is clear to any player of this game that it is certainly different from most first-person shooters.  The pace here is slower, more contemplative, as you find yourself tasked with achieving objectives using a variety of skills and stratagems, none of which involve charging in and mowing everyone down while you scream obscenities into your Bluetooth headset.  As the title suggests, your primary weapon is the sniper rifle, with which you pick off enemies piecemeal from your chosen hiding places.  You use the L2 button to look down your scope, and the R2 to fire.  Press the R1 button, and you can “hold your breath,” which brings up a red focal point on your scope, giving you extreme precision aiming.  To add a further layer of realism to this very sim-like game, a heart-rate monitor limits the length of time in which you can engage the red targeting.  Fire at exactly the right moment, and in the “sweet spot,” and you are rewarded with a slo-mo clip of your bullet sailing from your gun to the skull, kidney or (ahem) even the private parts of your enemy. 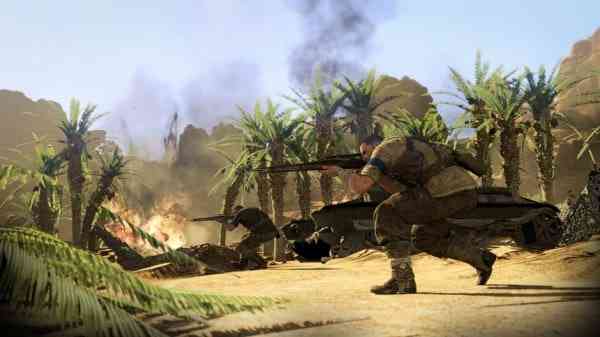 As I hope I am conveying here, the shooting experience in Sniper Elite III – the core of the game – is indeed a lot of fun.  I really got into the experience of staking-out my prey, looking around for hidden enemy snipers, and going for that insta-kill perfect shot.  The aforementioned kill animations are extremely graphic, and involve a sort of X-Ray view of your poor victim’s innards, as the instrument of his death makes its grizzly way through his organs and bones – it really brings a whole new meaning to the term “surgical strike.”  These visual treats, while seemingly a gimmick at first, never get old.  It was always a satisfying thrill to stop and watch my bullet work its deadly magic – in fact, it reminded me a lot of the V.A.T.S. system from Fallout 3 (definitely a good thing), in which you get a similar, gory finale to successful attacks.

Now, as enjoyable as the sniping is in Sniper Elite III, even that would get boring if that’s all there was in the game.  Luckily, there are other aspects to your experience as well.  Prominent among these is stealth combat – in fact, you do so much sneak-attacking of enemies from behind in this game, it could just as easily have been called Neck-Shanker Elite III (although I’d say they made the right choice).  Because sniper-fire draws the notice of the AI enemies spaced around the game’s levels (and in quite large numbers I might add), you would be very unwise to rely on it exclusively.  I found myself sneaking up and knifing enemies quite a bit out of necessity.  It is a strength of this game that it encourages you to find varied and creative ways to take-out enemies – in addition to sniper-fire and knifing, you can place dynamite and shoot it, you can place mines, you can even blow up fuel tanks and vehicles to create massive mayhem and carnage (but also a lot of AI attention, so you have to be careful).  This game treats you with respect, and allows you to use your intelligence, as well as your steady trigger-finger, to achieve your objectives in the way you feel is best.

If we are talking about intelligence, however, I must discuss a weakness of the game – the general lack of said intelligence on the part of the game’s AI.  With all of the pains that were taken to give this game a sim-like realism, the simplistic and … well, dumb behaviour of the enemies took me out of the illusion often.  Sometimes I simply waited around a corner, or at the end of a tunnel, as AI enemies came slowly into my trap, in a nicely spaced-out pattern, allowing me to clear out nearly an entire area pretty easily.  As for sneak-kills, I am fine with enemies not ever hearing me when I am right behind them – hey, who knows, maybe I have incredible ninja-stealth creeping skills – but sometimes their buddies, standing right next to us, made no reaction as I butchered their comrades not 5 feet from where they stood, gazing into the North African sunset.  I found these moments amusing, for sure, but not a desirable feature in a game that puts so much emphasis on realism. 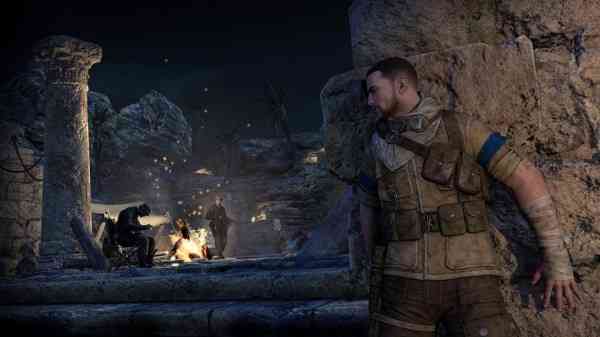 The AI comes off looking bad in the game’s Alert system as well.  When enemies become aware of your presence, the radar/HUD turns from white to yellow or red, depending on how sure they are about your presence.  So far so good.  What I had a problem with was the way the AI completely forgets about you when the alert stops.  There is no “fuzzy logic” to the AI’s alert system – it’s like there is only an ON and OFF in its algorithm.  So, I had many moments where, after I had just slaughtered multiple Nazi soldiers and was being chased by soldiers who had sighted me, the alert reset, and they instantly went back to being completely oblivious to me.  I laughed as I watched German soldiers make small-talk with each other, surrounded by bodies and charred vehicles from a fire-fight just 30 seconds before, with an enemy who was clearly still right in front of them!

One other small but important bone I have to pick with Sniper Elite III is its sometimes-fuzzy collision detection.  I suffered way too many cheap deaths after some Nazi dude shot through the corner I was hiding around, or through the top of a crate I was using as a shield.  Again, it is a glaring shortcoming in a game that has such beautiful precision in its shooting and aiming mechanics.

In its level design, Sniper Elite III is good, especially at the beginning.  The first few levels are really fun, and the environments are actually quite large, enclosed set-pieces.  There are lots of enemies to deal with (as mentioned, if you are not smart enough, you can draw hordes of them and be killed pretty quickly).  You have a nice combination of Primary and Secondary Objectives to keep you interested, from killing a particular Nazi, to blowing-up artillery positions, to collecting Intel from camps. I also liked the open-ended nature of the level design, which allowed me to tackle the objectives in a variety of ways – think of each level in this game as a sort of small sandbox.  The problem for me became the repetition – new levels mostly offer more but not new objectives.  The story, in which you are Karl Fairburne, a sniper chasing the German General Franz Vahlen, is as dry as the Egyptian desert at times, and seems to provide little more than an easy set-up for more sniper action.  Even the environments and art design, which impressed me at first with their beautiful desert vistas and lush colors, grew less and less impressive the more I found myself in them. 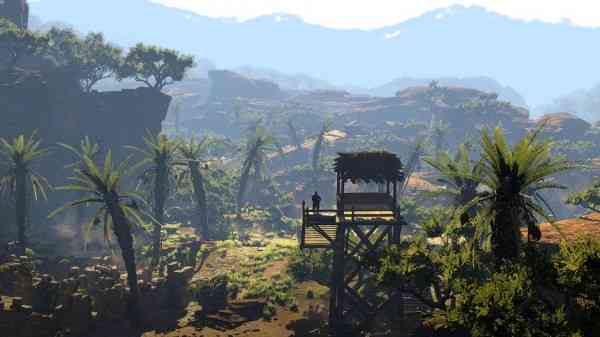 In Sniper Elite III Ultimate Edition, you get Multiplayer mode and new previously-DLC missions.  There are also a number of nice Co-op modes, which make the campaign essentially a whole new experience by adding in a second player to help clear a level.  The highlight of the extra DLC is the mission in which you save Winston Churchill from assassination.  For a history buff like me, it was a rush to play a role in such iconic moments in a video game.  As for Multiplayer, it is a mixed bag.  There did not seem to be a huge Multiplayer community when I checked – some modes offered no other players in the Lobby.  What did seem to have the numbers was Team Deathmatch.  This was reasonably fun, although it suffers from the fact that, as a sniper game, players often sat and waited for everyone else to come out in the open.  So, imagine a typical multiplayer match in which almost everyone is camping, and you have the idea.  You also do all your killing (and dying) from a distance, which gave the experience a sterile, solitary feel that left me a bit cold.  Whether or not this is your thing is for you to decide.

Sniper Elite III is, overall, a fun game and a nice alternative to the ADHD adrenaline-fests that most Shooters offer these days.  You will feel like a bona fide OSS sniper at times, as you watch your perfect shots shatter the pelvises and rupture the spleens of your Nazi enemies.  While the basic gameplay mechanic gets it right, the lackluster story and cement-headed AI keep this title from greatness.  If you are looking to try something different, Sniper Elite III Ultimate Edition is definitely worth a shot (sorry, couldn’t resist).

Next Fire Review – You, Come Play Caveman Adventure… it Good!
Previous MLB 15: The Show Review – Not Exactly the Grand Slam We Hoped For