It’s important not to judge a book by its cover, or a game by its graphics. If I had only looked at screenshots of Smashbox Arena, I might have written it off as a low-quality cash-in by a studio taking advantage of some young developers. But go below the surface of Smashbox Arena, and you’ll find a lot to love inside.

I was immediately surprised to see an option for Story Mode when I booted up the game. I love a good plot to move me along through a single-player mode. Unfortunately, “Story Mode” is a misnomer at best, and a blatant lie at worst. There is no story in Smashbox. Goofy characters spout one-liners that sound as if they were written by a computer at the start and end of each match, and, aside from a sentence or two of text at the end of the game, that’s it.

But Smashbox Arena doesn’t need a story. Essentially, the single-player story mode exists so you can play against bots. Each game is a battle between the blue team and the orange team, both made up of three members. Scattered around the field of play are a variety of glowing balls. Grab one with your PlayStation Move controller and chuck it at an opponent. If it hits them, they’re dead. If it sounds to you like I’m describing a game of dodgeball, give yourself a pat on the back – it is. Of course, it’s a bit more complex than that, starting with how you move around.

“Movement is probably the thing I struggled with the most.”

Probably in an attempt to avoid the motion sickness that tends to crop up in games with free movement, the developers have implemented a teleportation system. However, it’s not as simple as point-and-teleport. Pressing the Move button on either of your controllers, you launch a spinning device, the arc of which you can see drawn on the field before you release the button. You’ll teleport to wherever the device lands, after a short delay. Because teleportation is controlled with a physical device, it’s possible for your opponent to disrupt your movement with a well-placed throw, which adds another layer of complexity to the proceedings.

Movement is probably the thing I struggled with the most. In fact, in the beginning, I actively hated it. The more I played, though, the more I got used to it and even began to appreciate it as a gameplay mechanic. But moving is pointless if you’re not also chucking balls at your opponents, and beyond the standard orbs you’ll find around the battlefield, there are a handful of special items, too, like a ball blaster and a heat-seeking missile. They add just enough variety to keep battles from getting stale. I do wish there were more than a handful of arenas to play in, though. I did get tired of seeing the same handful of locales. 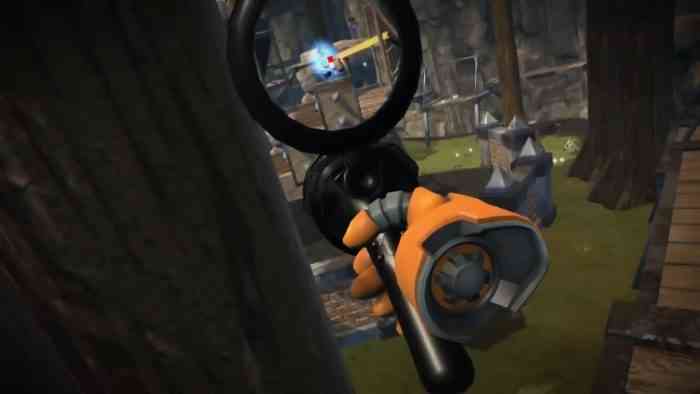 Moving around and blasting bots may be fun, but one thing that does the single-player battles no favors is the AI. It’s not that it’s too easy (though on Easy difficulty, it is), just that the AI is so slow and frequently buggy that it can become distracting. In one battle, I died and took on the bird’s-eye-view of the battle you’re given while you wait for the round to end. I witnessed two AI characters battling, and somehow they teleported into each other, becoming stuck. With no way to control the action, I just had to wait until the timer expired and the match ended. That wasn’t the only glitch I encountered, either. Balls getting stuck in the air was a somewhat common occurrence. None of these issues with the game or the AI were controller-throwingly agonizing, but annoying, nonetheless.

If the AI is annoying you, it’s probably time to move on to multiplayer. Other than training, it’s the only other game mode available. While there weren’t a ton of people playing when I logged on, it was super easy to join a match in progress. If there aren’t six people to fill the rosters of both teams, AI bots are inserted, and they are swapped out with real players as they join. Playing Smashbox Arena against other humans completely changed the game for me. Suddenly, I wasn’t dealing (as much) with glitchy bots, I was trying to outsmart actual people. The fun factor increased significantly.

“If corners were cut with the graphics, they were completely rounded over and sanded down in the music and sound department.”

While it’s fun, Smashbox Arena isn’t pretty. The 3D models are simplistic, and texture detail pops in and out, not just when you look away, but when you shift your perspective even a little bit. I also had a few issues with the UI. There’s actually very little information you need while playing, and the information that is presented to you – who defeated who, etc. – can be obtrusive, popping up much too high in your field of view. I credit at least one pop-up notification with an untimely loss. (Yeah, okay, maybe I’m making excuses, but it’s still frustrating.)

If corners were cut with the graphics, they were completely rounded over and sanded down in the music and sound department. There really isn’t any music to speak of, and the sound effects are all very basic. There’s voice acting, but there really shouldn’t be. Line delivery is terrible. The team was definitely not concerned about the aesthetics. While the lack of compelling sound and attractive graphics hurts Smashbox Arena a little, it doesn’t destroy the fun. 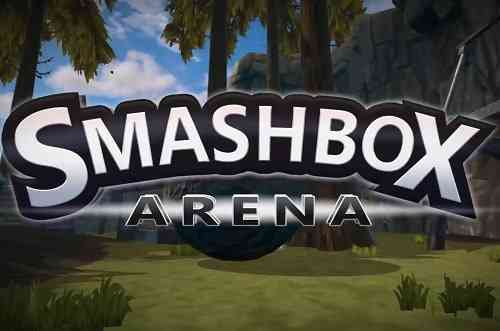