Onechanbara Z2: Chaos Review – Voluptuous Sexy Women in Bikinis Can Only Take You So Far

Onechanbara Z2: Chaos is the third game in the Onechanbara series that has made its way to North American shores with the other eight only being released in Japan or Europe. With a total of eleven games that have been released over the past decade, Onechanbara has done pretty well for a series that is fuelled by fan service and gore-filled action. After some extended playtime with Onechanbara Z2: Chaos it is clear this over the top game isn’t meant too seriously. However, it doesn’t mean you can’t have fun with it.

The story of Onechanbara Z2: Chaos isn’t something you want to analyze to a great extent because it really is just dramatic scripts and dialogues thrown at you. To make matters worse, since only two other Onechanbara games have been localized here in North America, the backstory and flashbacks won’t make total sense. Unless, of course, you’ve played the previous instalments. Nonetheless, the story is focused on four girls with two of them from the Vampiric Clan – Kagura and Saaya – and the other two from the Baneful Bloodline – Aya and Saki. The two clans have clashed and collided numerous times, but with the world overrun by the undead, they have to work together if they want to save the world and survive. As a result, all four of them are under the “Zombie Punitive Force” umbrella being forced to work and cooperate with one another.

“Aside from the obvious lewdness the game oozes with, the dynamic between the four girls and each of their unique personalities are the most entertaining features of the game.”

The story is told through a mix of CG cutscenes, a western style comic, and also a Japanese style visual novel. I never expected this sort of mix to exist or even work. But it worked extremely well and presented the story better than the story itself can even be boasted about.

Aside from the obvious lewdness the game oozes with, the dynamic between the four girls and each of their unique personalities are the most entertaining features of the game. You really get all the personalities – the shy one, loud one, cool one, and cold (but actually loving on the inside) one. Not only that, but you get some hilarious broken English (or broken Japanese in the English dub) that’s purposely done for humour’s sake. The dialogue and script does a great job in getting some laughs out and being just downright entertaining. Of course, if you’re in it for the fan service, you won’t be disappointed on that end either.

The four girls are completely customizable as long as you unlock items to customize them with. From their hair and clothes, to their combos and weapons, it’s all at your fingertips to fiddle around with. I was truly surprised with the amount of detail the characters have and how customizable they are. Whatever you equip them with, they’ll also appear in the CG cutscenes which I was pleased to see.

Aside from Story Mode, you can also fool around in Mission Mode and Practice Mode. Mission Mode is where the game gets more engaging and addictive, as it’s where you’ll obtain other unlockables by completing specific criteria. Practice mode speaks for itself – practice combos, get accustomed to them, and get used to the characters.

In terms of the combat, it’s your average hack & slash mechanics with a bit of a twist. “Cool Combos” are combos that require you to hit the appropriate button at the correct time. When done so successfully, you’ll see the word “cool” come up notifying you that you have indeed landed a Cool Combo. While this may seem totally “cool”, in all honesty, when you’re in a battle you’re not really thinking about hitting the right button at the correct time – especially when hordes of enemies are constantly charging at you. Not to mention, you’re also constantly playing catch-up with enemies just to kill them. Worst case scenario, sometimes you’re trying to find the last enemy because it prefers walking up against a wall than trying to kill you. With a feel of a Dynasty Warriors game, it does feel like a mindless hack & slash game, especially with the lower grade AI. However, like a Dynasty Warriors game, it has flashy moves and explosive colours that light up your TV monitor so that you’re still attentive to what’s going on. 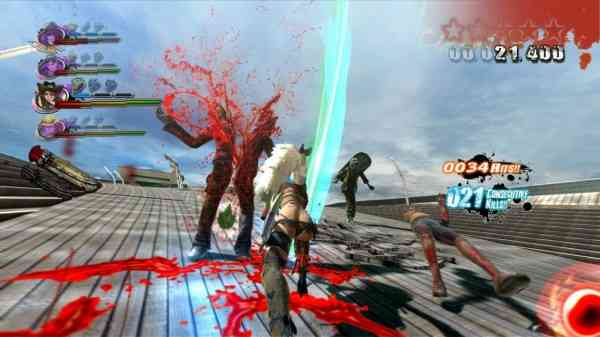 Aside from the hacking & slashing portion, you can also dodge, dash, switch between the four characters, or even get all the girls to fight at the same time. With endlessly hacking away at enemies, it’s always nice to be able to switch it up by “tagging” another character in. Each girl has two different weapons, so variety in combat is evident here and helps in progressing through the game.

Visually, Onechanbara Z2: Chaos actually looks great. Like I mentioned earlier, the amount of detail put into the game surprised me. Whether it’s the detail in content or detail in how the game looks, it’s all been taken care of extremely well.

Even more so than it’s visuals, the voice acting and especially its music are perfect for the game. Given the dramatic and cheesy script, both the English and Japanese voice acting successfully presents the humorous and exaggerated world of Onechanbara Z2: Chaos. Meanwhile, the music could not be better. The soundtrack is made up of a whole range of different types of music, but with one sole purpose of putting you in the mood for zombie slaying. Fortunately, it does just that and I couldn’t be happier about it. The soundtrack is definitely one of the best features of Onechanbara Z2: Chaos. 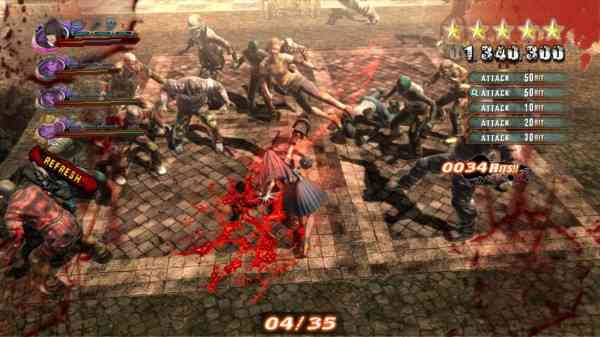 Onechanbara Z2: Chaos without a doubt feeds off fan service and gore-filled action, but it surprisingly offers more than that. With the amount of detail put into the game, dynamic cast of characters, superb voice acting, and addicting soundtrack that’s sure to put anyone in a zombie slaying mood, Onechanbara Z2: Chaos can be enjoyable beyond the very two things it feeds off of. However, the core gameplay can barely hold up on its own. With a combat mechanic that doesn’t execute very well and an unfortunate AI, the repetitive hacking & slashing at times becomes a drag until you hit the next flashy move or even cutscene. Above all, just make sure you don’t play this in front of grandma or grandpa.