Ever since Madden NFL 25 dropped a couple of years ago, EA Sports beloved pigskin game has been on the upswing. This isn’t to say Madden 25 was awful, it was anything but, rather it left a lot of room for improvement and wasn’t exactly a smashing debut on the now current generation consoles. Madden NFL 16 continues EA Sports mantra of making small incremental enhancements to their yearly sports titles. There is no major overhaul of the Madden graphical engine or the core gameplay. The way you throw, run, catch, tackle and kick works just as it did last year. By and large it looks and feels like the same game. This isn’t necessarily a bad thing as Madden continues to inch closer to near virtual gridiron perfection making Madden NFL 16 is the best we have seen from the franchise to date.

Before we roll out the red carpet and plan the victory parade for this year’s Madden game, there are some aspects that are somewhat disappointing. For starters, some technical issues crop up every now and then. I noticed some clipping issues where players would walk right through a referee and another glitch in Madden Ultimate Team (MUT) where blank players appear in player cards. Other odd glitches surface during the replays and sideline shots. These issues will likely be resolved with a patch but at the time of writing the deficiencies remain. Despite the eventual fix, some of the games presentation and menus are far too similar to last year’s game. Fans of Madden NFL 15 will notice this right away when you launch into a game and watch the opening montage. Likewise the Connected Franchise (CFM) and the MUT modes haven’t revamped or upgraded the modes as much as I would like. For instance, I expected a marked improvement over last year’s MUT’s auction system, and how you can assign the player cards to collections. I just felt more could have been done here to make it a little more user friendly and easier to manage.

As far as the negatives go, that is about it for Madden NFL 16 as the positives outweigh the negatives by a large margin. This year’s madden hosts a suite of new features and enhancements that will make the hardcore and casual Madden fans satisfied. It looks better and without question sounds better with a varied 30-song soundtrack. I’m not entirely convinced the core gameplay is a leap yet but it’s certainly on par with Madden NFL 15 which played great.

New this year is an incredibly enjoyable Draft Champions mode. Having played fantasy football for the past 25-years (yes, you read correctly I played Fantasy Football back in the days when we had to tally up the scores using the newspaper) this mode absolutely nails the thrill of drafting your players and watching them perform. In this mode you venture through 15-rounds to build your team from scratch by selecting one of three players each round. With only 15-rounds you cannot upgrade every position so there is a ton of strategy with your picks and you have to draft to your strengths. Once you have drafted your team you can take them on the field against the CPU or other players. What makes this mode particularly satisfying is how quick and repeatable it is. If you take a loss and don’t like your team, you simply redraft another. It is this rinse and repeat option that works so well in this mode. I also really liked the fact the rewards are tied to your MUT team, so kudos to the development team for making that happen.

I’m not convinced Draft Champions will catch on like MUT has in recent years; however, there is no question it is a blast and unlike anything we have played in Madden to date.

“As I mentioned Madden 16 still plays, and feels largely the same. The “if it ain’t broke, don’t fix it” approach was taken again.”

Last year, I enjoyed how I was greeted with an interactive experience when I first booted up Madden 15 that placed me in a fictional 2015 NFC Championship game between Carolina and Seattle. This year we get a similar experience when you boot up the game which features a hypothetical Super Bowl match-up between the Cardinals and Steelers. In this cinematic experience you take control of the Steelers as they attempt to bring home a record 7th Super Bowl Championship. This mode almost gives you a glimpse into the future of Madden as it features several branching story points all based on your actions and performance in the game. Just like last year, my only gripe… I wanted more.

As I mentioned Madden 16 still plays, and feels largely the same. The “if it ain’t broke, don’t fix it” approach was taken again. Yet some gameplay aspects do see some changes and most notably with the Wide Receivers. Receivers can now choose from three different types of catches (aggressive catch, run after catch, and possession catch). Aggressive catch was my preference, especially when bombing it downfield. It takes some getting used to and I sure hope the aggressive catch doesn’t become an online exploit. Regardless, I liked the new addition and found myself relying on the new mechanics with each game I played. 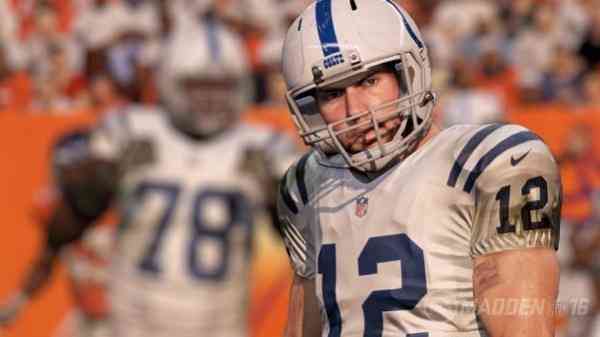 There are also some new tools for QB’s which allows them to place in the perfect location. This is nothing new for the franchise but it’s being built as the new touch passing mechanics. I don’t see much of a difference here but EA Sports tells us there has been. I guess the jury is still out on this one. Defenders also have some new tricks up their sleeve when it comes to disrupting the pass game. Defenders can now play the ball, play the receiver or attack the ball carrier in numbers.

Besides learning some of the new mechanics, Madden fans should be able to pick up where they left off and compete from the get go. I am still getting used to how the Running Back moves this year and QB’s cannot cancel play action and roll out as quickly as they could last year. Likewise some of my money blitzes from Madden 15 don’t come in as quick as they did in last year’s game. Otherwise, I am not having any issues playing the game.

Exploits, glitches and nano blitzes have always been the dark cloud hanging over the franchise. So far this year the AI has proven able to stop some of those exploits that plagued Madden 15. PA End Around glitch is gone and it does not appear face catches are dominating the online world. I recognize it is super early and most of the YouTubers haven’t released their nano videos or other glitch videos but so far, so good.

As much as I am down on CFM and MUT for not doing enough, there were a couple of new additions that jump out in both modes respectively. As for CFM I like the new in-game drive goals that dynamically update every time you take the field. Accomplishing certain goals gets you additional XP and a confidence boost. Likewise the new scouting system is much improved. As for MUT, I found the addition of Ultimate Moments fantastic. These quick little challenges are all about re-living specific situations that occurred in the NFL last year (and apparently some debut throughout this upcoming season). Bottom line, MUT fans can expect weekly changes and new content until Madden 17 drops. 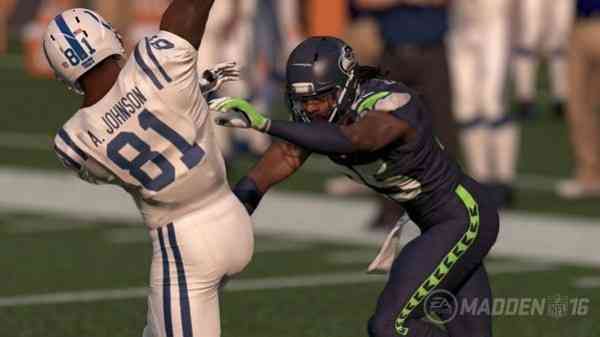 I mentioned at the outset how impressed I was with the visuals and soundtrack in Madden 16. Everything from the gear to the head tracking has received noticeable upgrades. Coaches look better and the stadiums truly shine. The lighting for night games also looks incredible. The attention to detail is stunning and its eye popping from the moment the team’s lineup for opening kick-off.

Madden NFL 15’s soundtrack, or lack of one, stunk. It was lame and forgettable. This year’s soundtrack is quite easily the best soundtrack since Madden NFL 12. It features more than 30 tracks from artists such as: The Weeknd, Yelawolf, Lee Brice, twenty one pilots, James Bay, Blackberry Smoke, and Sigma. The mix also includes brand new music from John Newman, Don Broco, Robert DeLong, Fashon, and Rag‘n’Bone Man. I am only just getting into all the tunes and I’m loving most of them so far. Now let’s hope EA Trax is here to stay.

Overall, I am quite happy with this year’s installment in the Madden NFL franchise. While the changes may not be as sweeping as we have seen in the past, Madden NFL 16 feels like the most complete Madden I have played in well over 10-years. I cannot recall a time where I wanted to play every single mode offered in the game over and over. That is the case this year. The new addition of Draft Champions is a delight and CFM and MUT continue to shine. There remains plenty of room for improvement, but there is no question the franchise has moved closer to a more authentic, true to life NFL experience.