With a one-button control scheme, Badlands Game of the Year is a title that is easy to learn but hard to master. Taking control of a ball of feathers named Clony, you are tasked with stopping creatures from rising from the depths of a lake. You navigate by flying through levels that become more dangerous as these creatures ascend. Your goal is to send these creatures back where they came from, restoring Clony’s habitat back to its peaceful state, and all within a day’s time.

“… Badland GOTY is a game that easy to learn but hard to master. “

Jumping right in you’ll notice the silhouette levels and beautiful backgrounds. Typically, I don’t enjoy this kind of art style but the artists at Frogmind did it right. The silhouettes are quite detailed making it easy to discern what you can and can’t bump into. These details contribute substantially to the gameplay because you only have a split second to move in any given direction when flying through each level while trying to avoid obstacles. With the silhouettes as they are you can tell what’s going to fall on you or when some spikes are about to be propelled in your direction. Another reason these silhouettes work so well is the backgrounds are bright in comparison allowing them to pop out more. The backgrounds are stunning with immense detail, and there is a lot to look at while trying to focus on the game action. I would suggest you play each level a few times, not only for you to really see all the game has to visually offer, but the fact that much of Badlands story is actually told through the background art.

With the story told through the background art it is quite easy to overlook. There is no text or voice overs to help you here. Not having an in-depth story did add a nice “cherry-on-top” feeling that made me enjoy the game a bit more, but this is a personal preference. As the story goes, the creatures ascending from the lake are changing the peaceful world that Clony, and other clones, live in, causing it to become more dangerous and slowly killing the clones off. As simple as the story is, the nice touch that made the experience above average is how these mysterious creatures start to infuse with the level and cause it to become more treacherous. 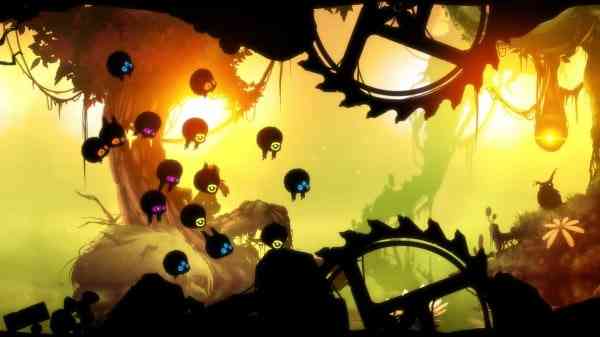 The day is split into four sections: dawn, noon, dusk, night; with each section becoming more challenging as you go. A full day consists of forty levels, ten levels in each section. It was fairly easy to start off and fly to the end of each level, especially if don’t touch anything that kills you, don’t get crushed by falling objects, and don’t let the screen engulf you as it consistently moves to the right. It’s a nice introduction, but soon the sections change and you are introduced to new pick-ups and puzzles that increase the overall difficulty. You need to think fast or the new puzzles will beat you and you will have to try that one section of the level again. You respawn often and the screen doesn’t start moving until you take your first move, so you can plan how to tackle that one troublesome puzzle all over again.

Puzzles can be challenging at times but a good amount of them are all about being in the right position at the right time. Most puzzles are solved by simply acquiring pick-ups to alter Clony’s appearance by increasing or decreasing in size, or giving him a temporary ability. The challenging puzzles are the ones where you control multiple clones at once. There is a certain pick up that instantly clones Clony increasing the number of Clonys you control – anywhere from one to about fifteen. At first it’s hard to control them all and keep track of them on the screen, but you only need to keep one alive in order to continue on. The challenging part is when you need to split them up so some can push a button that will allow the others to pass by an obstacle. This takes some time to master, but once you get a hang of it these puzzles become about positioning. 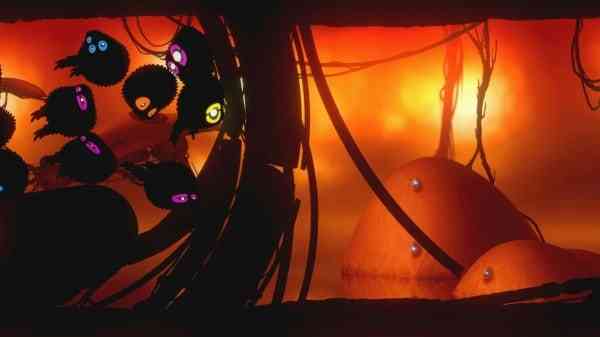 Badland offers two other game modes besides the single player: co-op and local multiplayer. Co-op is essentially the single player campaign but with an added difficulty as you and your partner can easily bump into each other and often one of you will ricochet into a deadly obstacle. Whether it was an accident or on purpose I’ll let you decide, but in local multiplayer this is a different story. There are a few different types of game modes here to challenge your friends in, but by far the most fun match is “Last Man Standing.” The basic game play is doing anything and everything to kill your opponents in the environment. These matches can be short or drawn out as you fight for who is the best clone.

With games like this where you are constantly bumping into objects the audio often repeats the same ear dulling sounds until it’s burned into your brain. This is not the case in Badlands; every time you bump into something it sounds different, even if it’s just a slight change in pitch. It just makes a huge difference. Along with the music and ambience being fantastic, the audio built on top of an already pretty good game make it that much better.

“I will warn you though; if you don’t have patience this game may challenge your gaming prowess.”

Quickly becoming one of my favorite games when I have a few minutes or so, Badland GOTY is fairly enjoyable. Originally a mobile game, the port to consoles and computers is solid. All the little details; from the backgrounds to the audio to Clony’s eyes changing to portray his mood, it all adds a lot of value to the game. The three bonus challenges in each level also adds hours of replay value, especially if you are the “100% completion” type of gamer. I will warn you though; if you don’t have patience this game may challenge your gaming prowess. You will most likely die a lot and need to rethink your strategy many times, and if that isn’t your thing then this game may not be for you. However, if you are looking for a game to spend hours on, have a quick ten to fifteen minutes to spare now and then, or are looking for something to play as you transition between other games, I would highly recommend Badland GOTY.