It’s been a good while since a decent combat helicopter title has hovered its way into people’s hearts. The first game fitting that description that most people will think of (and rightly so) is the classic Desert Strike from the 16-bit days. Since then though, it’s been a barren wasteland out there for those who like to tweak their rotors. In order to correct that, developer 3Division has brought something a little more realistic to the fore with the Xbox One port of their PC title Air Missions: HIND, which tends on the simulation side of things, but which also provides options to allow for a more forgiving and arcade-like experience.

Unfortunately, it’s all a bit of a mess.

From the game’s very first clumsy introduction to the control scheme, something doesn’t feel right about the way the various copters handle. It doesn’t help that the controls displayed in the tutorial are at odds with what you have to input on the controller. Even with the “Casual” input setting enabled, you never really feel as if you have true control over where your chopper is heading, or at what speed. This makes aiming air-to-ground missiles quite difficult, to the point of frustration. You need to lead your targets of course, but it doesn’t help when you can finally line up the shot you want to take and fire three rockets within milliseconds of each other, only to see one hit, one fall short, and one fire far too long. It’s nonsensical.

“Even with the “Casual” input setting enabled, you never really feel as if you have true control over where your chopper is heading, or at what speed.”

Similar criticisms can be made when it comes to using guns. They’re more controllable of course – missiles are strapped to the body of the vehicle, whereas the gunner can change his aim independently – but they’re just as hit-and-miss when it comes to how often they’ll get near an enemy. You can even enable an auto-aim feature for guns, which locks them onto the closest target. That would be handy, was it not for the fact that you can lock on, then fire off a volley or two and see every bullet miss by yards.

What exacerbates this issue is that you have limited ammunition. Taking what should be a perfect shot with your final missile and watching it hit nothing but dirt for no good reason is often the difference between completing a mission and having to restart it, since, when you run out of ammo, you’re done. Well, the game won’t tell you that you’re done. Instead, you just fly around aimlessly with no offensive weaponry whatsoever, until you realize that there’s no way of restocking your arsenal and you just give up. You could probably try flying back to the base to see if that would do anything, but there’s no map other than the proximity radar, so unless you’ve dropped a trail of breadcrumbs along the way, that isn’t happening. In fact, mission failures are not the only place where Air Missions: HIND falls silent. It’s quiet in general. Aside from a couple of Russian sentences (with English subtitles) in each mission’s preamble, it’s just you and the sound of the rotors. There’s no radio chatter – even when you’re flying in a squadron with a couple of AI pilots – and the soundtrack is barebones at best. This compliments the general feel of the single-player campaign, which is simplistic, repetitive and relatively dull when you consider what other games are doing. With one or two exceptions, the enemies are much the same from mission to mission, which gives a feeling of déjà vu as you play through. There are bolt-on additions in the “Instant Mission” and “Instant Action” modes which will provide a little longevity to those who find themselves drawn in, but ultimately, it’s just more of the same basic gameplay that the campaign provides.

Multiplayer play is on offer, allowing for players to take the campaign or instant missions on in co-op mode, as well as providing straightforward deathmatch for single pilots or teams. Somewhat unsurprisingly for such a low-key port, the servers are absolutely devoid of players. So, unless you have a friend who has also taken the plunge into Air Missions: HIND, you’re likely never going to get the chance to sample anything other than playing solo. Should you find that other player to play in co-op mode, the chances are that you’ll have as much fun as playing alone anyway. You can take that any way you’d like.

A handful of people will be able to put up with the control schemes and almost entirely random nature of the weaponry, as well as the feeling that this was rushed from PC to console as quickly as possible to make a few quick bucks, and will have fun with it. The rest of us will be put off by helicopters glitching through scenery, enemies that you absolutely cannot hit, as well as landing gear that refuses to deploy (in the very first training mission, no less) causing you to have to jump back to a checkpoint. An uncontrollable and unneeded mouse pointer appears sporadically in some of the menus too, which provides further ammunition to the argument that this was just thrown onto the console in the shortest possible amount of time.

“The real kicker here is that Air Missions: HIND features some incredibly detailed helicopter models – almost full simulation quality – and initially looks like it has bags of potential. Sadly, it doesn’t even come close to realizing it.”

The real kicker here is that Air Missions: HIND features some incredibly detailed helicopter models – almost full simulation quality – and initially looks like it has bags of potential. Sadly, it doesn’t even come close to realizing it. Some will get an hour of two of enjoyment out of the game before they realise that they’re on a hiding to nothing, but with an open goal in terms of competition on the platform and what is sure to be a stack of air combat fans waiting for something to sink their teeth into, it’s hard to see how the developer has fluffed this so spectacularly. 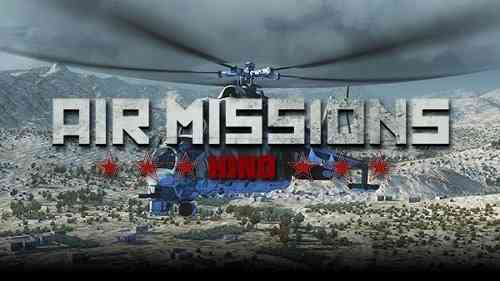 
Combat Flight Simulator “Air Missions: HIND” Now Available on STEAM, Coming to Xbox One
Next MXGP3: The Official Motocross Videogame Review – A Stick in the Mud
Previous Dead by Daylight Review – Follow us into the Basement…