When Sea of Thieves was first announced, we all saw stars at Rare’s latest game in a very long time. Promising an adventure on the high seas like no other, expectations reached an all-time high for what kind of multiplayer experience this could be. We were fortunate enough to have an opportunity to assemble some of COG’s greatest pirate… enthusiasts to give Sea of Thieves a chance and see just what kind of swashbucklers we could be. I could go on and on talking about the game – stay tuned for an official impressions piece – but nothing will quite do the game justice like watching Shawn, Trevor, Michael, and Garrett have an absolute blast as they get drunk on grog, run aground, attempt to scuttle enemy ships, uncover some booty, and get fired out of a cannon. Check out our gameplay below and let us know what you think!

Sea of Thieves is an open world multiplayer game where players will come together to form a pirate crew and do all those wonderful things pirates do: plunder, pillage, and drink. Players will be able to customize their pirate and upgrade their gear from discovering booty and robbing other players, as well as forming pirate fleets with other players and conquering the various forts out to sea. With an art style full of Pixar/stop motion style and the classic Rare flair, Sea of Thieves is shaping up to be quite the experience, especially if you already have a crew ready to go. 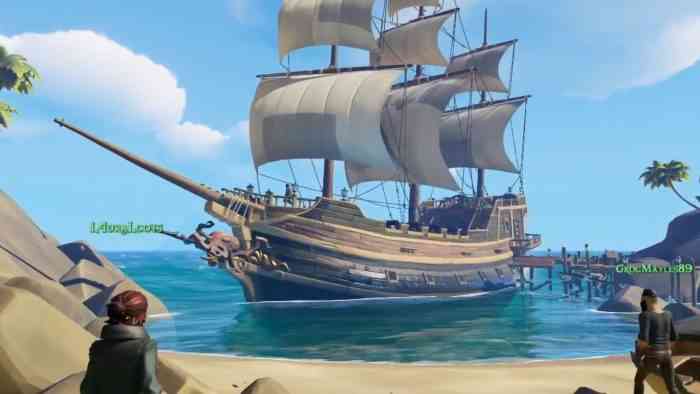 Sea of Thieves is set for release on March 20, and will be available on Xbox One and PC. For more information, check out the games official website, and please let us know what you think of our sorry attempt at piracy on Facebook, Twitter, and the Comments section below.