Yoshi’s New Island (3DS) Review – Does this Dino Find the Magic Once Again?

Yoshi is no doubt a fan favourite. He is widely recognizable, almost as much as his ever faithful plumber companion. The cute little dinosaur has made numerous appearances across the Mario universe and played a starring role in a number of his own games. Regretfully, I have never had the opportunity to play a game in the Yoshi series, but I had high hopes for Yoshi’s New Island given some of the fantastic games that have been recently published by Nintendo, as well as how much I enjoy many of the games in the Mario series. Unfortunately, Yoshi’s New Island didn’t quite live up to my expectations as it wasn’t the fun platformer I thought it would be, but it doesn’t’ mean it’s a total loss.

Poor Baby Mario, he’s had a rough day! Mistakenly delivered to the wrong house with his brother Luigi, the stork frantically returns to deliver them to their real parents. Unfortunately, there is a quite a kerfuffle mid-flight and Luigi is kidnapped by the wretchedly evil Kamek and Mario falls to the sea. Meanwhile, Baby Bowser, who even in infant state is up to no good, is planning to take over Egg Island and make it his vacation home. Baby Mario thankfully lands safely on Egg Island in the midst of Bowser’s evil ploy, and the residents of the Island, the Yoshi’s, make it their mission to carefully watch over the baby while helping him find his brother and find Bowser’s castle before it’s too late.

Having never played the original I must admit I struggled a bit for the first few minutes trying to grasp the controls including the hovering jump, aiming of eggs at enemies and obstacles, gulping and spitting out enemies, all while ensuring poor Baby Mario is safely secured on my back. However, once mastered I easily made my way through each level, almost too quickly at times.  Perhaps because I am not the target audience as no doubt Yoshi’s New Island is geared towards a younger crowd, but I whizzed my way through each level, some within a matter of minutes. Even the boss battles seemed rather insignificant, extremely easily to defeat, three hits and done.  And death is a rarity; the only penalty from being hit by an enemy is Baby Mario floating away and being scooped up by the Kamek’s minions if he’s not reached within 10 seconds. 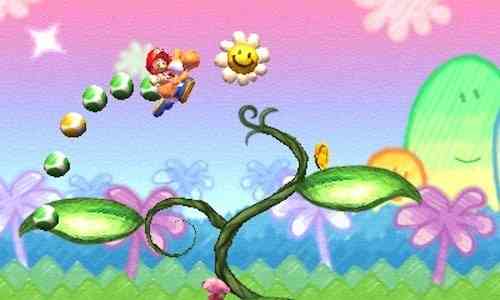 I’ve been spoiled by some of Nintendo’s recent platformers, many filled with innovative and exciting level designs, but you won’t see any of that here. Pretty basic stuff, rather unoriginal and standard: hop here, jump there, break this, and so forth. While Yoshi’s New Island is meant to be an update to the series, it’s quite evident that the developers are relying on the same old formula. My daughter, an avid fan of previous entries in the series, noted that very little has changed, and it feels just like Yoshi’s Island DS. There are 6 different worlds to play through, and 8 levels in each, and despite their appearance, they all feel much like each other; however, there are a few brief mini game sequences within the levels that do change the pace a bit, in which Yoshi converts into a vehicle of some sort, such as a hot air balloon or submarine, and using the 3DS’s gyroscope you race against the clock to collect as many coins as possible. There are also ginormous Shy Guys that pop up, and when Yoshi consumes one then spits it out you are rewarded with a huge egg, that when pushed, sets forth on a path of destruction, revealing secrets and alternate paths.

A number of red coins, stars and smiley faced flowers can be found throughout each level, and the true completionists will find themselves painstakingly collecting them all, many hidden in the midst of gold coins or within flying question mark boxes, which not only adds a nice replay value, but also adds a bit of a puzzle element to the game.

While the level design was drab and uninspiring, the graphics at times were pretty to look at and were highlighted quite nicely when playing in 3D.  A palette of beautiful colours, backgrounds that at times look crudely drawn with crayon, seemingly as if ripped from the pages of a storybook, all very fitting for a game filled with crawling infants and cute dinosaurs. 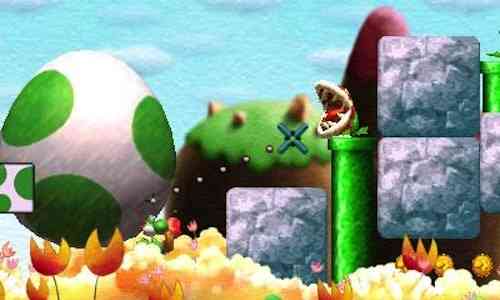 If you’re a fan of the kazoo, or the sounds of a baby’s mobile, you will really enjoy the soundtrack. I personally did not. I understand that it’s meant to be childlike, quirky and light, given the gameplay and imagery, but I simply could not stand the music, often finding myself playing with the volume down. Yoshi’s little quips and noises were absolutely adorable though, but the constant beep paired with the shrill wail of Baby Mario when he’s knocked off Yoshi’s back is extremely irritating, especially when it happens frequently.

While there is no online play there is the option to connect to another 3DS and play with a friend via download play if they have a copy of the game themselves. The 2-player mini game mode offers a nice change of pace from the dull single player mode. With new games unlocking as the game progresses you can play against a friend competitively or with them co-operatively in games such as Enemy Eat Off, in which each player gobbles up enemies and makes as many eggs as possible, or Eggy Pop, with players working together to pop balloons with eggs.

My first venture into the Yoshi series has left me feeling slightly disappointed. It’s not awful, but it wasn’t the fun, challenging platformer I was hoping for. The cartoonish adorable characters, crayon drawn visuals and the happy, friendly soundtrack will certainly appeal to the younger folk, as this is what the game seems geared for.  For young teens and older, the boring level design and lackluster gameplay makes Yoshi’s New Island hard to recommend, but for those young ones out there, about 10 years and under, this game should fit the bill nicely.