Wargaming have earned themselves quite a niche into the gaming world with their online forays into vehicular combat. Between World of Tanks, World of Warships, and World of Warplanes and its many iterations, Wargaming has not only earned themselves quite the reputation but have basically cornered an entire genre unto themselves. This has resulted in an absolute ton of fast-paced vehicle mayhem that allows you to battle other players in a versus match or team against the AI. World of Warships: Legends offers a bevy of ships, commanders, and mode to choose from that is an absolute blast to play. The only thing that keeps Legends score from soaring higher is a very troublesome pay-to-win model that Legends, and inherently, Wargaming has.

Let’s delve into the gameplay mechanics of Legends. It has acquired the name ‘Legends’ as the ships at your disposal are all older naval ships, most of them from the WWII era. There are cruisers, battleships, and destroyers, each of whom offers differing speeds and weapon compliments. Each of these classes offer quite a deep offering of choices which you unlock as you gain experience from playing in battles and giving you more options in pummelling other ships into broken husks on the seafloor.

While you may have the biggest ship with the highest HP and the most amount of guns, by no means does that give you superiority over the sea. Several times in the capture the flag style game where you and your team must secure the most bases before your enemies I went in with supreme confidence that I was going to wipe the floor with my enemies. Fast forward to me dead in the water, torpedoes incoming, desperately trying to shell an enemy ship into oblivion before the torpedoes take me out. Where I failed in my tactics in that match was assuming my brawn could get me through the match but four much faster cruisers cut me to ribbons as they sailed circles around me while an enemy destroy shelled me from afar. Tactics play a huge role in this game, something that took me some lumps to understand. It’s all fun and games when you’re defending a base as you and a couple of teammates are devastating everyone in sight but much different when you have to thread through the island terrain to try to outflank an enemy. That’s usually when you find yourself in the crossfire of a group of ships and you’re very quickly on fire.

The more ships you unlock also offers you more ways to play. You are tasked with different missions that give you rewards to help you level up and with every few level jumps at the beginning you also unlock different things to aid your battles. Choose commanders, upgrade weaponry and armour, and check out your status before heading back out to sea. The great part about Legends is that even if you’re killed early on in a match (definitely, for sure, not speaking from experience), you can go back to port, load up another ship and hop back into another battle. Once the matches end, you are given access to your ship again and you reap the benefits of having participated. It’s also very quick to find a match so the turnaround time in games is quite short. 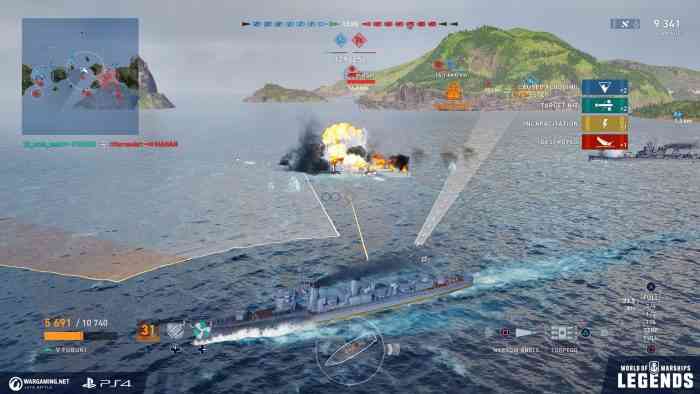 I did run into a few problems with World of Warships though. There’s a ‘tutorial’ that you play through to get you accustomed to the game, you know, like a tutorial would. Except this seemed more like I was the cow being lowered into the raptor in Jurassic Park. It was a little frustrating to be absolutely decimated the first few rounds but once you figure how responsive the ship is to steering and speed, the rest of the game comes pretty handily.

Which brings me to the problem I mentioned at the beginning. World of Warships is a free-to-play game and as most people know by now, free-to-play usually means pay-to-win. Unfortunately, Wargaming seems to embrace this model as you are 100% going to be paying several hundred dollars on this game if you want to be the best of competition. Since so much of the deals in the store are based on microtransactions, the in-game currency is worth its weight in digital gold. While you do get a decent boon of currency with each round and level up, the second upgrade I was offered for one of my ships was 200,000. A sum I was not even close to having. Right out of the gate, the game steers you towards a path of paying to help yourself out with unlocking better ships and upgrading your current roster with better weapons and boy, it is not cheap. One of the base packages offered on the main page of the store is $149.99 and, quite frankly, it doesn’t really offer that much. For what is roughly double the price of a standard game, you get the bounty of what will roughly up jump you about 10 levels and have one really cool ship.

Part of my review was getting in-game currency so I don’t have to grind in order to get the full experience of the game. While this makes a reviewers life a little easier, in this instance the huge gap between free-to-play and pay-to-win became extremely evident. The first couple of days with Legends, I played just like any other person who picks up the game and was promptly obliterated in every round with every ship. This did mean I leveled up quickly but I was no competition for the others on the high seas. At a certain level though, I was gifted what would turn out to be roughly $150 in currency for Legends to help ease my grind, as I previously stated. It became quite apparent why I was getting crushed almost immediately as I hopped in a big ass destroyer that I had upgraded very quickly and suddenly, I was wiping the floor with my opponents. Now, it’s not to say that I still needed to use strategy and I did still get sunk when I played, but it was literally a night and day experience. The fees that comes with playing World of Warships are in direct correlation with how much you will get out of the game and that’s a real problem in my books.

Wargaming and its ‘World of’ franchise have turned military vehicle combat into a fun, popular, and extremely lucrative series of games that are very well done. Most of the time, I’m usually done with games once my review is over and it’s a real testament to the playability of a game if it stays in my heavy rotation. Legends has earned that spot as one of the games that I’m going to continue to enjoy at least semi-regularly for the next little while… or until I run face first into that paywall and my interest wanes. Hopefully, I’ll get a solid run out of World of Warships: Legends before I get priced out.