The Witcher 3 for the Nintendo Switch has arguably been the toughest game I’ve had to review. On the one hand, this is still the Witcher. It’s a classic tale told over a sprawling world with diverse characters and exhilarating combat. It’s a game that has received countless accolades and an endless stream of praise, consistently having people rate it as their favorite game of all-time, even nearly five years later. But on the other hand, this is without a shadow of a doubt the worst version of Witcher 3 to date. Throughout my nearly thirty hours of what Saber Interactive’s ambitious port has in store for players, I was pelted continuously with a silver sword of doubt over whether or not this was at all necessary in the first place.

I won’t spend too much time delving into the mechanics, lore, or other stuff of that nature, because, at its core, this is the game we’ve known and loved for the past half-decade. For newcomers, however, you play as Geralt of Rivia. Geralt is a Witcher – a sort of mercenary for hire – who quickly becomes caught up in a war between the empires of Nilfgaard and Redania. Throughout your journey, you’ll meet monsters, witches, elves, dwarves, and a whole other host of compelling and memorable characters. One of the most significant aspects of the Witcher is it’s deep and rewarding side mission system. More often than not, you’ll find side missions to be even more engaging than the main story, routinely throwing twists and turns at the player to keep them guessing.

Amidst all the chaos of the happenings of the realm, you’ll quickly become adept at swordplay, as well as wielding magic. At your disposal is a list of spells that you can switch between on the fly, to compliment your physical attacks. The core gameplay loop here is still fun as hell, with battles becoming an intense pattern of dodging, parrying and attacking. It helps too that despite the limited hardware of the Switch, the frame rate remains reasonably steady throughout even the most demanding of battles. The fact that they were able to keep the frame rate as stable as they have may just be the most impressive feat of this entire endeavor.

Not Such a Pretty Pony

Naturally, Saber Interactive was going to have to downscale the resolution of this game by quite a bit. It’s no doubt impressive that they were able to stuff the entire game, including all of the DLCs and patches onto one of the Nintendo Switch cartridges, but at times the game looks terrible. This certainly isn’t always the case, as I think interiors actually look quite good, and the game is entirely serviceable while you’re in the midst of character dialogue. However, things start to fall apart when you step outside and look over the horizon. Or when you’re riding through an open field, and bushes, trees, grass, and other assets pop in with nearly every step you take. Or when, God forbid, you put the game into docked mode. 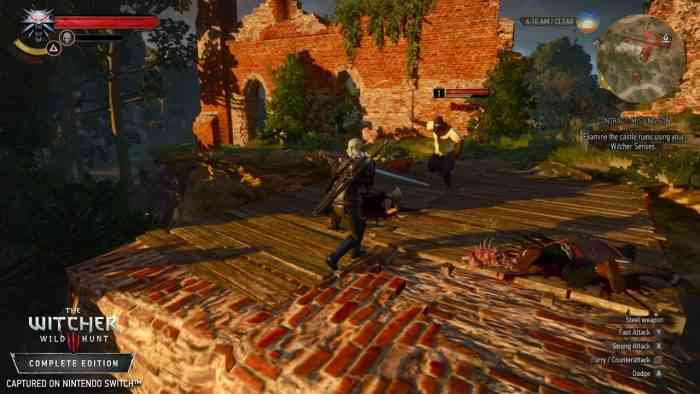 Of course, blowing the game up on the big screen is going to increase resolution, but if there was ever a game to avoid doing this with, it’s The Witcher 3. Seeing this game on a 55-inch 1080p TV nearly brought a tear to my eye, and it had nothing to do with happiness. Colors pop a bit more, sure, but this doesn’t mean that details are suddenly more prevalent. In fact, if anything, the opposite is true here. Things look decidedly worse upon plugging the system into its dock, with all the blurriness, low-resolution textures, and (what I found to be) an unimproved frame rate now on full display. The smaller screen of the Nintendo Switch actually helps to hide a lot of these technical shortcomings, making the experience night and day when compared to playing docked.

Another problem I ran into was one with the actual Switch hardware itself. Compared to a Dualshock 4 for example, the Joy-Cons have a feeling of an undeniable flimsiness to them. The actual sticks themselves feel light, and at times, imprecise. I couldn’t shake these feelings during my entire time with the game. Geralt feels much harder to control on the Switch. His movements became overly sensitive, and it would cause me to have to continually reposition myself to begin dialogue or to investigate an item. This, I felt, was caused directly by the way the Joy-Con sticks react to input. To test this theory, I fired up The Witcher 3 on PS4 and had none of the same issues whatsoever. I was able to maneuver flawlessly, with Geralt appropriately reacting to each subtle movement I made.

No Real Pull for Witcher Vets

At the end of the day, this just isn’t what CD Projekt Red had in mind for this game when they were developing it all those years ago. Their creative vision hasn’t been lost entirely, but so much of the detail and little nuance has disappeared. For this reason, I found it excessively challenging to stay engaged in the same way I did back in 2015. Who was this port made for? Veterans of the Witcher 3 have absolutely no need to return to this world, as nothing new has been created for the Switch version. People who have access to literally any other console or PC must play the game on that because it will be unequivocally better than the Switch version (and most likely cheaper, at this point). The only real demographic I can see this appealing to are the ones who haven’t played the game over the past five years, and can’t play on any other console than the Switch. I don’t imagine this is a large pool to pick from. 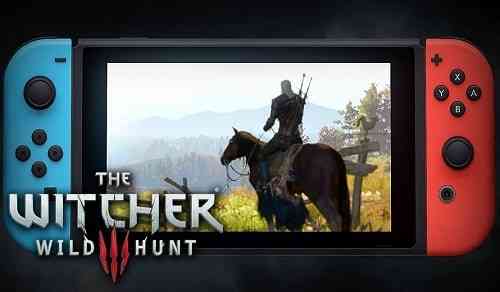 7 Reasons Why You Should Not Quit Cyberpunk 2077
Next MediEvil Review – A Spooky Overhaul of a Devilishly Difficult Classic
Previous Call of Duty: Modern Warfare Review – Comfortably Numb